* Use both one-minute and five-minute poses for this exercise.

This is another one-minute or five-minute gesture study making use of straight and curved lines. Instead of starting with one line that runs through the entire figure, as in Exercise 46, start with what seems to you to be the predominating two-dimensional shape. This shape may be suggested by the whole figure (for example, a squatting figure may have the general shape of a triangle) or by a part of the figure that is important in the pose (when the model ties his shoe, the bent shoulders and the arms may suggest an oval). Having decided on this first shape, add to it or break it up with other straight or curved lines suggested by the pose, continuing just as you do in Exercise 46. It is not necessary to make your shapes exactly geometrical. They may be somewhat irregular. Beware of using a circle, for it tends to isolate or conclude itself, and things should never be isolated.

Draw for six hours as directed in Schedule 23 A and 23 B.

EXERCISE 55: MODELLING THE STRAIGHT AND CURVE

This is a continuation of Exercise 46, so begin by making a gesture drawing in straight and curved lines, using lithograph crayon. Then model the drawing. Use five-minute poses at first, lengthening them gradually to a half-hour or more.

The way of modelling is necessarily indefinite 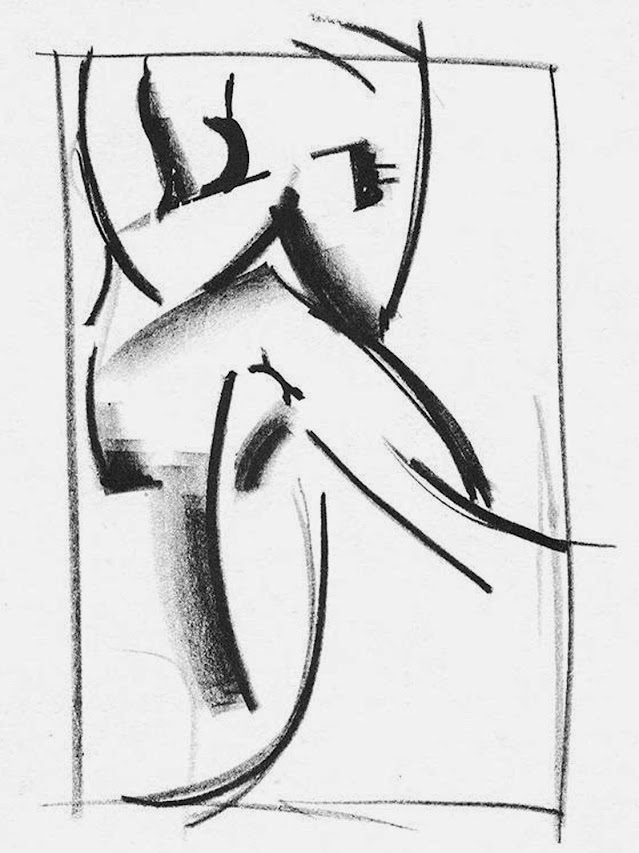 The most exact direction I can give is this — just as your straight and curved lines do not follow the contour as it exists but heighten the meaning of the contour in relation to gesture and design, so your modelling does not follow the form exactly as it exists but seeks to heighten the meaning of the form. Do not try to model all of the form, just as with straight and curved lines you do not try to draw all the contours, but be very selective. Choose those surfaces to model that intensify the meaning of the pose. Model them with two aims. One is to describe or to emphasize the form and the other is to create on your paper  a well-balanced design based on the gesture of the model. Those were also your aims in putting down the straight line or the curved line. 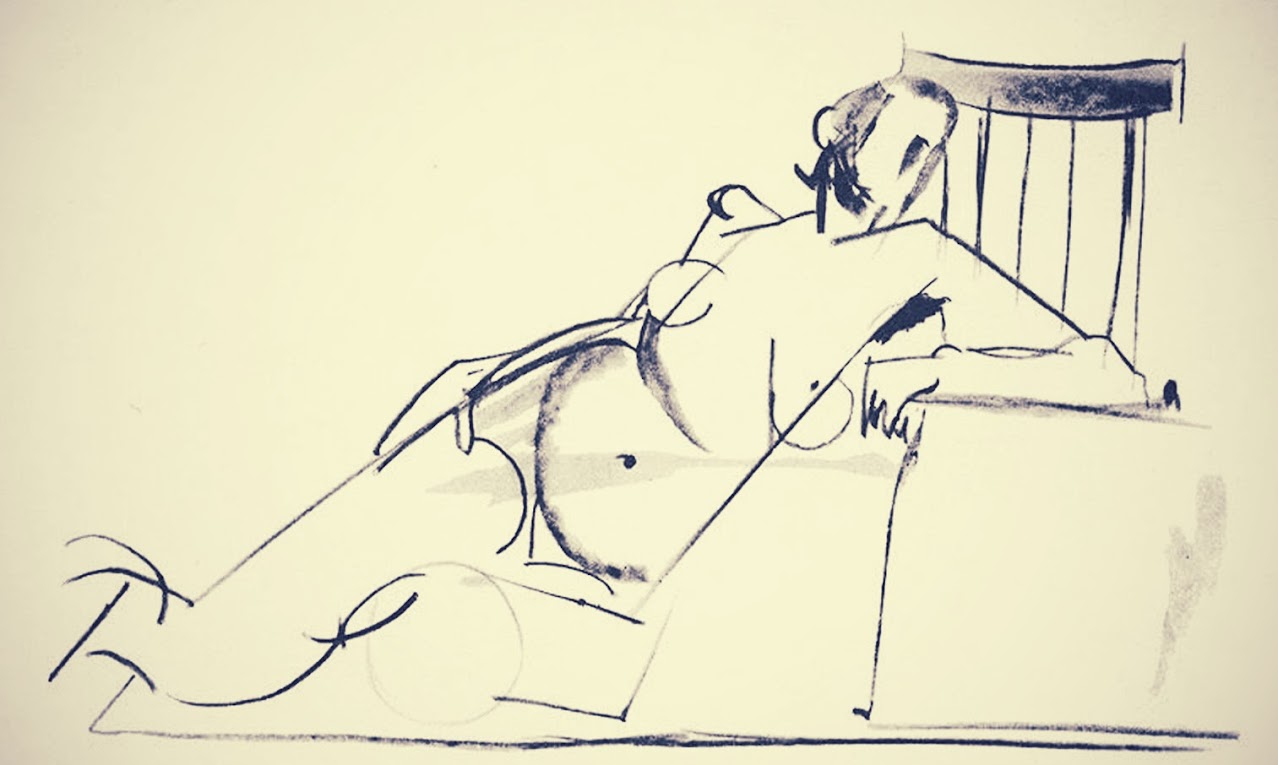 It would be a mistake for me to try to pin this down to a particular method. You must be given a certain amount of leeway because your drawing will develop out of your own feeling and understanding if you are not too much limited. Some of my students have more completely filled the space between the outside edges of the figure and have done it successfully, while others have left considerably more blank space. Either could be correct. You may go through one way of working and come to the other. Remember the existence of what is underneath the planes which appear. The sense of substance should always be in your consciousness and, naturally, in your drawing.

If you are at a loss as to how to begin modelling, I suggest that you simply draw a few cross-contours or vertical contours on the figure and start filling in the space near or between those lines. But do not fill in all the space. Jump from one place to another, seeking to intensify the gesture. One way to progress in this exercise is not to look too often at the model. When you do look, look to see the gesture — hardly know that you are looking at the parts. You will find yourself selecting, saving, those forms which are most affected by the gesture. Add whatever lines seem necessary for the simple emphasis of your first impulse. This should be no cheap imitation arrived at by conscious distortion, but an effort to comprehend the gesture in a fresh way.

Draw for six hours as directed in Schedule 23 C and 23 D.

EXERCISE 56: STRAIGHT AND CURVE IN FRAMES 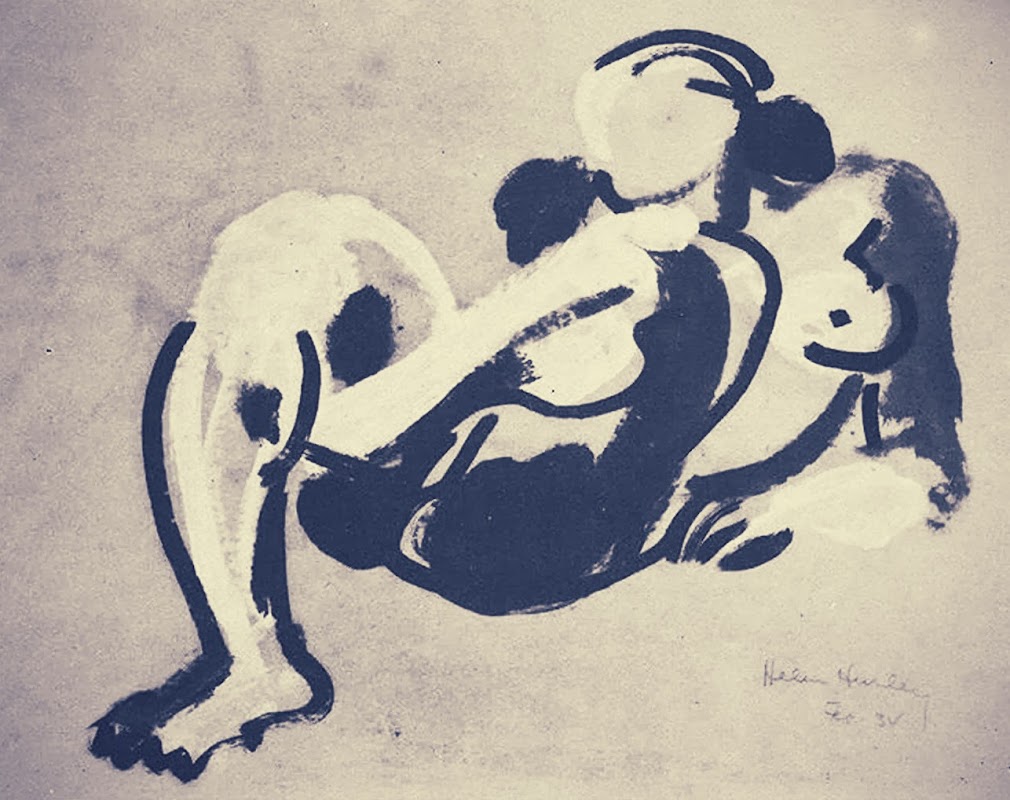 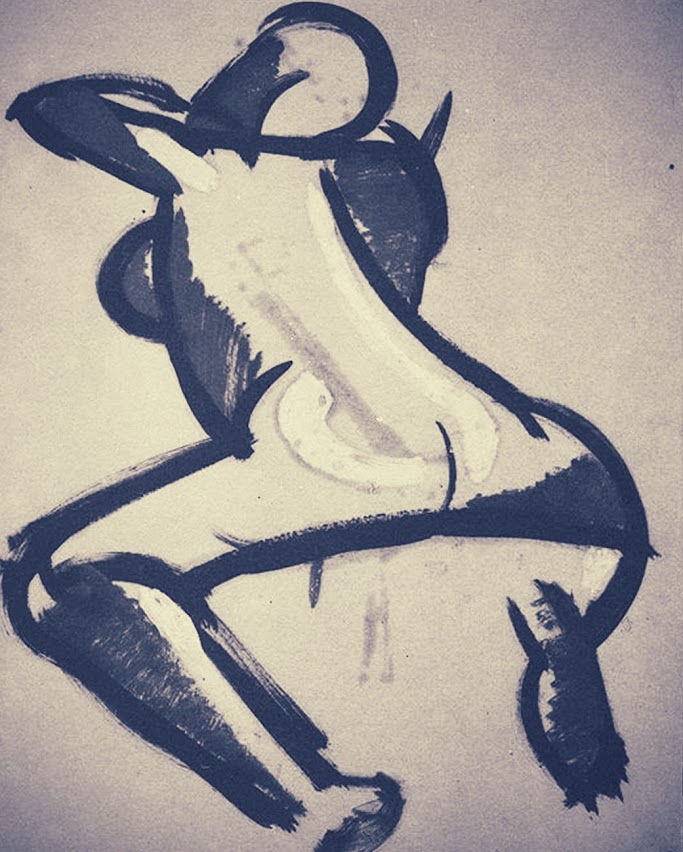 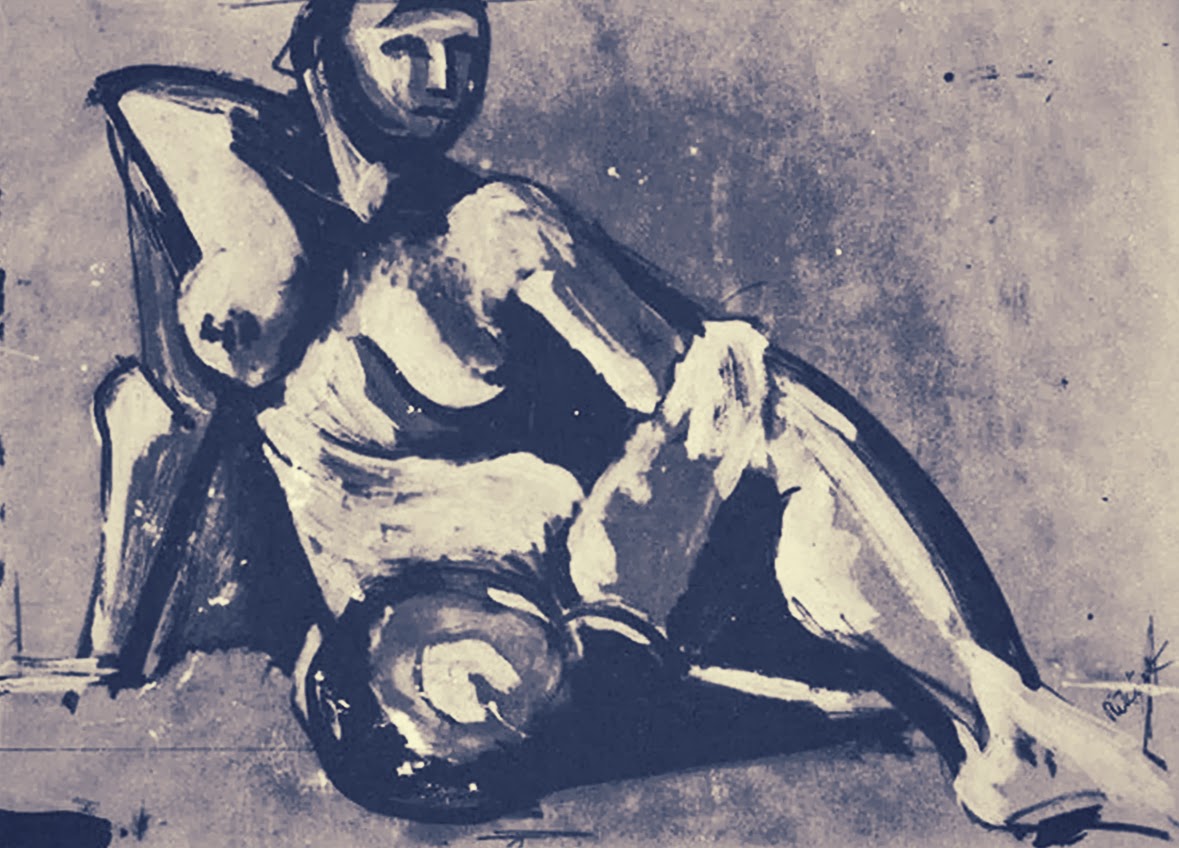 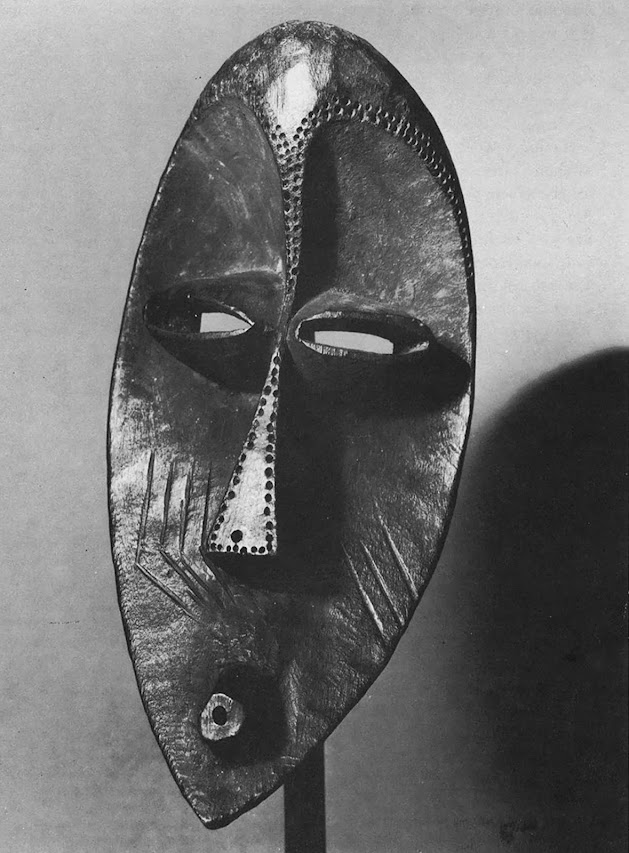 Courtesy of Ike Museum of Modem Art
African Negro Sculpture: Wooden Mask
You will find yourself selecting, saving, those forms which are most affected by the gesture

Draw on your paper several frames of various shapes and proportions — square, rectangular, round, triangular, et cetera. Start in a somewhat haphazard way with one of the smaller details of the figure. For example, you may begin by selecting the inner line of the model’s shirt collar as a curve which you decide to place in the upper left-hand corner of the square. Having this arc moving down from the left-hand corner in a square, you are now presented with a dual problem:

(1) looking at the model and deciding what can be turned into a curve and what into a straight line.

(2) relating the next line you choose to the square and to the curved line which is now in the square.

You immediately see in relation to the second problem (that is, of continuing to fill the square) that you must move at some time or other diagonally across to the lower right-hand corner. It is instinctive to find yourself selecting from the model the line that will most quickly carry the movement in that direction. Therefore, you may skip the shoulder and select next the line of the arm from the shoulder down. The reason you do this is that the diagonal unifies. Any engineer would recognize this principle — you see it in steel girders and in the simple architecture of country barns. When you start with a four-sided piece of paper, your first effort is to hold these four sides together, and this can be done with the least waste of effort by a diagonal movement.

A perpendicular line down the middle of the paper would divide it instead of pulling it together. Having solved this problem, you must choose a third line whieh is related to the square and to the two lines that are now in it. No matter how you see the space, the things in it are to fill it and fill it in a pictorial manner. Continue selecting lines in this way during a fifteen-minute or half-hour study. The drawing may be made from anything you happen to look at — your own hand, a clump of bushes, any part of the figure, a group pose. The subject will probably not be recognizable in the drawing. When you become accustomed to the exercise, begin to make use of modelling.

Obviously, your selection of lines cannot be exactly the same when you begin to work in a triangle or circle instead of the square. This exercise is planned to help you see the figure or the event in what might be called its more abstract relationship to the paper. It enables you to see the model in a new way, from a fresh point of view, as if you looked at it through a new pair of glasses after wearing a pair that did not suit. (Take one of these drawings, turn it upside down, and make a scribbled gesture drawing of another subject over it. This will give you further understanding of the way the lines relate to each other and the paper.)

The Path for the Eye 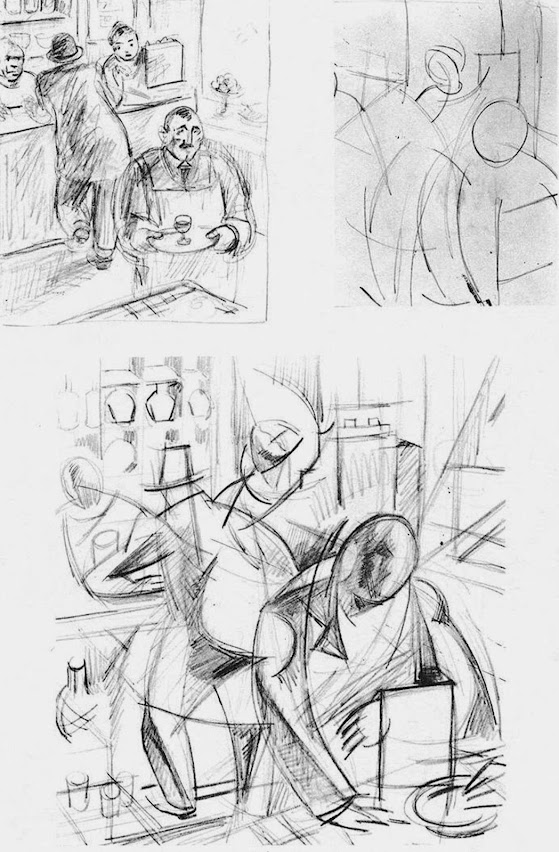 As you fill the paper, you build a path for the eye. The line moves in a certain direction and the eye follows it. As the eye comes toward the end of a line, it is caught by another line which moves farther or turns and travels in another direction. You make the eye follow exactly where you want it to follow. You let it stop and linger in places, move it swiftly at other places, and bring it sometimes back again. In building this path, you naturally choose the lines (or the forms or colors) which best indicate the movement you intend, that movement being dictated by the gesture of the model.

The straight line in general suggests more strength than the curve because it moves more quickly from point to point, so the strongest movement is apt to be a straight line. Sometimes when you have made a straight line for the sake of the gesture or in contrast to other lines, you find that its movement is too strong, that it carries the eye too quickly. You wish to invite the eye to linger a little. Then you can slow the movement down by cutting across it with lines which do not necessarily exist in the model (Figure 1).

In other words, the way of slowing up the eye is to force it to turn at times in different directions from the main movement. This principle is often made use of in stores by the placing of counters and signs, and on the stage by the physical movement of the actors. Similarly, you can step up a line by making arrows alongside it and you can slow that up by making other lines in opposition to the arrows (Figure 2). These principles are to be found in all good composition although we isolate them for the moment.

Draw for three hours as directed in Schedule 23 E.