* Devote approximately a half hour to each exercise with the model posing nude. As you progress, concentrate on first one part of the figure and then another.
** Use group poses.

How the Muscles Work

Muscles are like rubber bands — they can pull but they cannot push. Therefore there must be two sets of muscles for every motion — one set to pull out and another to pull back. The two sets are placed more or less opposite to each other and while one pulls the other is relaxed. Likewise, in twisting, there is one set of muscles to twist to the right and another set to twist to the left. The muscles are attached to the bones and operate on the bones, pulling them back and forth.

Although we speak of muscles as if they belonged to one bone, as ‘muscles of the upper arm,’ actually they belong to two. A muscle could not do anything if it existed only on one bone. The muscle that pulls the forearm up could not pull if it were not attached to the upper arm too. At every point of the body where twisting is possible, such as the neck, the forearm, and to a less extent the lower leg and the waist, the muscles are arranged so that instead of going straight down or straight across they have a diagonal movement. For example, the muscles which turn the hand over are attached to both the elbow and the hand and move around the forearm with a movement similar to the lines on a barber’s pole. In studying muscles, the important thing is to study how they work.

As an example of the kind of study I mean, let’s take a look at the deltoid or shoulder muscle. (Keep the charts of that muscle before you as you read this.) To understand the manner in which the arm is held to the torso at the shoulder, imagine that you are making a doll out of wood. Take one block of wood for the upper section of the torso and a smaller rectangular piece for the upper arm. Cut off the top corners of the block representing the torso and place the arm against the angle thus cut out as in the diagram. It now becomes necessary to fasten the two pieces together, so you nail a strip of leather on top of the torso, pull it down across the top of the arm, and nail it to the outside of the arm. You see, however, that this will not keep the arm from slipping forward or backward out of place. You need a piece of leather that is somewhat caplike in form, having a flap at the front and the back to cover these openings. And that is essentially the way the deltoid muscle is constructed. To pull the doll’s arm forward you would need a piece of rubber from the front of the torso to the arm. This represents the chest (pectoral) muscle, one for the right arm and one for the left. On the back the same thing is accomplished by the latissimus dorsi, which grips the torso and grips the arms, pulling the arms back.

EXERCISE 50: STUDY OF THE MUSCLES 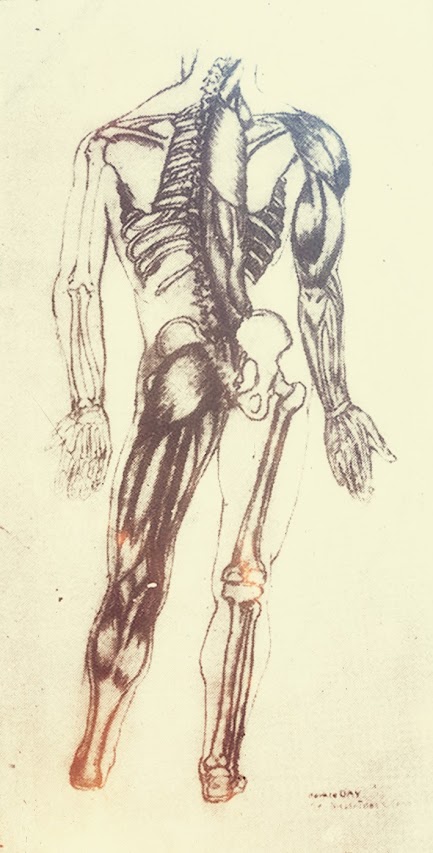 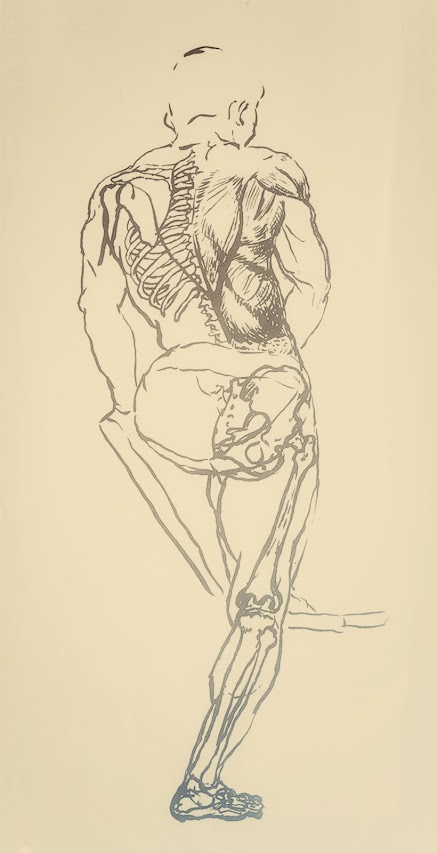 Place a piece of tracing paper on top of your drawing of the skeleton (Exercise 33) and, from the charts and the model, study the muscles. The most important thing is to show the attachment of each muscle to the bone. In drawing the leg muscles, for example, you should show that the biceps of the upper leg separates into two tendons which reach around and grip the big bone of the lower leg, leaving an opening through which the calf  muscle extends to grip the bone of the upper leg. The lower tendon of the calf muscle grips the heel. The arrangement of these muscles on the back of the leg is a perfect example of the overlapping which occurs throughout the body. Because of this overlapping you should draw only a limited number of muscles in one study. For example, since the deltoid covers the place where the biceps is attached to the bone, you might draw the biceps on one arm and the deltoid on the other, showing the whole of each muscle.

Any number of studies may be made over the same drawing of the skeleton, each having a different choice of muscles. On a front view of the figure you see, not only the muscles of the front, but parts of the muscles of the side and back as well. An important example of this is the trapezius muscle, a part of which is visible in the front view of the shoulder although it is a muscle of the back. Likewise, from the side you see muscles of the front and back and from the back you see muscles of the side and front. It is necessary to remember this when trying to correlate the figure and your drawing with anatomical charts because you see forms on the figure that are muscles from another side. You should not think of the front of the body as if it were distinctly separated from the sides like the front of a box.   Neither should you think of the muscles as separated from the rest of the body except for the purpose of study.

In drawing the figure the muscles should never be so overplayed that the actual main form is lost. For example, when you study the muscles of the neck, you observe that they are very different in the front and the back. In the front the bonnet-string muscles of the neck (sternomastoid) are seen to extend from behind the ear down to the pit of the neck, whereas the trapezius muscle of the back reaches all the way up to the base of the skull. The study of these muscles may have a tendency to break up the form of the neck in your mind, but the important way to think of the neck is as a cylinder that rises from the. shoulders to support the head like a pedestal. It is the unit that locks into the head and into the shoulders, and it moves as a unit without ever losing this simple cylindrical form. 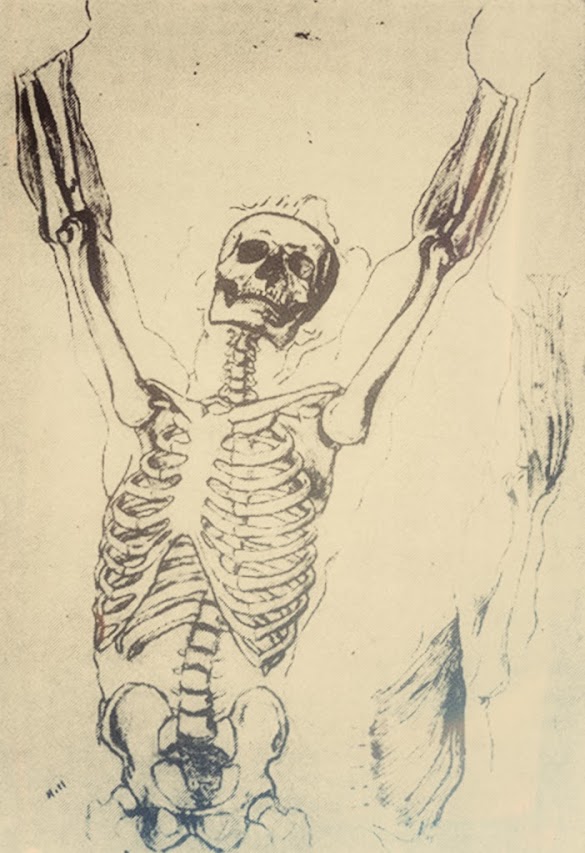 Draw for fifteen hours as directed in Schedule 21.