* Use paper of different colors.
** Use both one-minute and five-minute poses for this exercise.
*** Use group poses.

When I use the word design with reference to a drawing or painting, I mean simply that it has been organized in relation to movement. As there is movement in every act of nature, there must be the sense of movement in every work of art. It is the artist’s task to attempt to understand, first in nature, then in his own field, this principle of movement. Without contrast, and the understanding of contrasts, no sense of movement could be observed. In fact, without contrast there is no sense of existence. The world of existence revealed by the senses to the artist is a relative one, A thing is not soft unless you know hardness, not hot unless you know cold.

This series of exercises (Sections 19 and 23) is planned to intensify the contrasts that are to be found in movement, form, and finally color. We do them only as exercises, the practice of which should lead to some of the fundamental laws of painting. Go back to the most simple use of drawing — the line. There are contrasts between the long and the short, the broad and the narrow, but the greatest contrast in line is the difference between the straight and the curve. A line has no character by itself. Draw one line on a piece of paper. Is it short or long? You cannot say until you put another line of different length beside it. Then it becomes either long or short in comparison with the second line. Similarly, a line can seem curved in comparison with one line and straight in comparison with another, but for the present we will stick to the absolutely straight line, which we will contrast with a definite curve.

In the beginning, as a matter of pure exercise, draw a straight line to represent some contour on one side of the model. Then, attached to that, make a curved line. Continue up or down that side of the figure or object, alternating straight and curved lines and attaching each line to the one before it and the one after it. Proceed in the same way all around the figure, but, wherever there is a straight line on one side, try to put a curve opposite it on the other side. Use five-minute poses and always draw around the entire figure. These drawings will probably look like charts.

Draw for three hours as directed in Schedule 19 A.

As a natural result of practicing this exercise, you will begin to search the model in order to discover which contours may be best expressed by straight lines and which by curved lines. From now on, you do not have to make the straight follow the curve and the curve the straight. You will use each when it seems most suitable. However, the principle of alternation works pretty accurately and you should end up with approximately an equal number of straight and curved lines.

Draw for three hours as directed in Schedule 19 B. 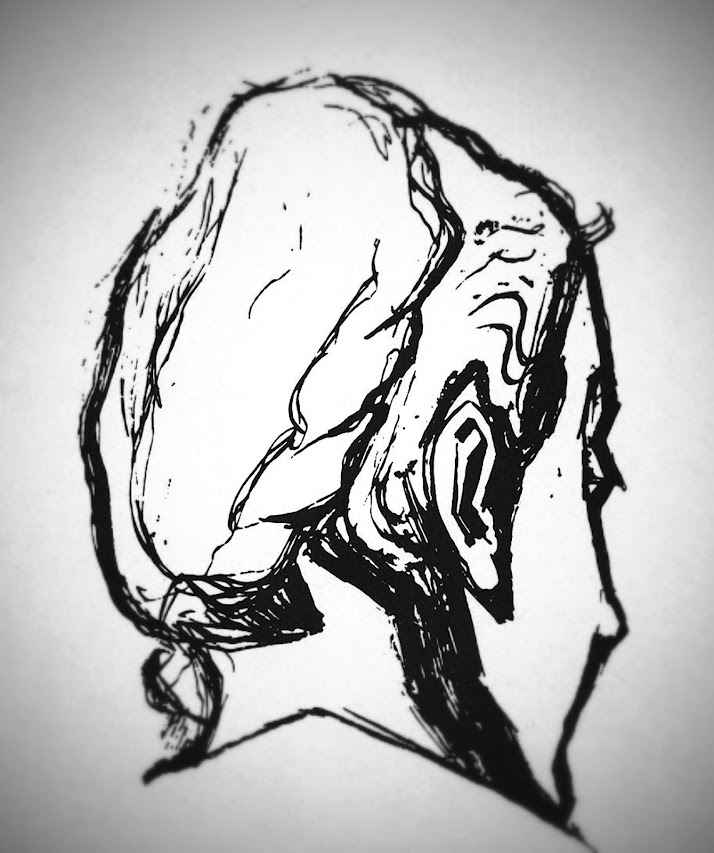 Munich, Pinalcotek
Head of a Woman from the Espolio by El Greco
Select those lines which seem to intensify the meaning of the pose 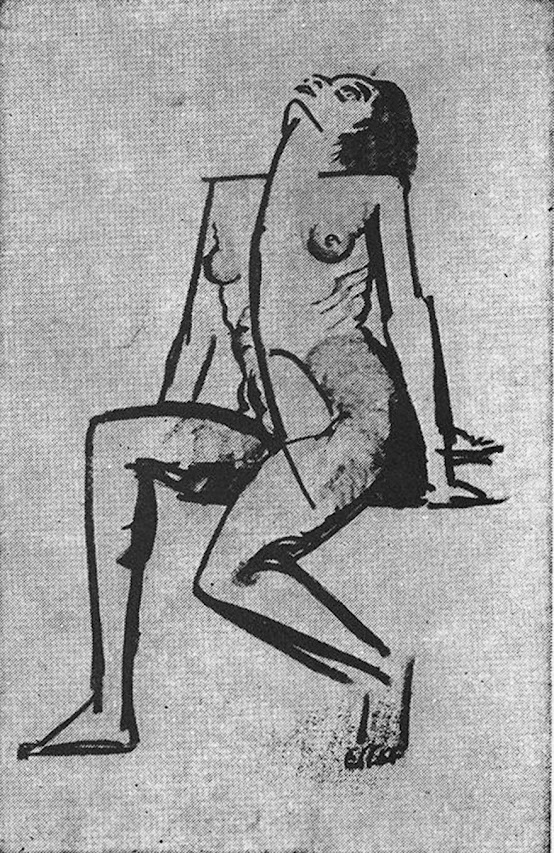 This is a quick study, for which you may use sometimes a one-minute pose and sometimes a five-minute pose. As I have said before, there is only one reason for making quick studies — to make a contact with the gesture. You are to use straight and curved lines, but use them as a means of analyzing, even quickly, the gesture. This study is done concurrently with ordinary gesture drawing and each feeds the other. It will be only a short time before the impulse you receive from the natural gesture of the model will fuse with your arbitrary use of the straight or curved line.

First reach about in your drawing for the movements that are biggest, simplest, and most connected, thinking of them as either straight or curved. As you do this, strive to find one movement, either straight or curved, that goes through the entire figure. This line need not be continuously on the contour but might start on the contour and then run inside of the body. It may sometimes include only the main part of the body or seem to divide into two lines, but on the whole try to see it as one line that will carry through the figure. Assuming that you have found a dominating curve, you should immediately attempt to see some complementary straight lines. After these first simple straight and curved lines are found, they themselves may be gone over and broken up or subdivided but always with the impulse of the gesture. Bear in mind that there is no one absolute analysis to be made. Out of twenty studies of one pose you might make twenty different selections in its presentation. They could all be right provided your first impulse came from the gesture and provided you succeeded in establishing the necessary balance between the straight and the curve. 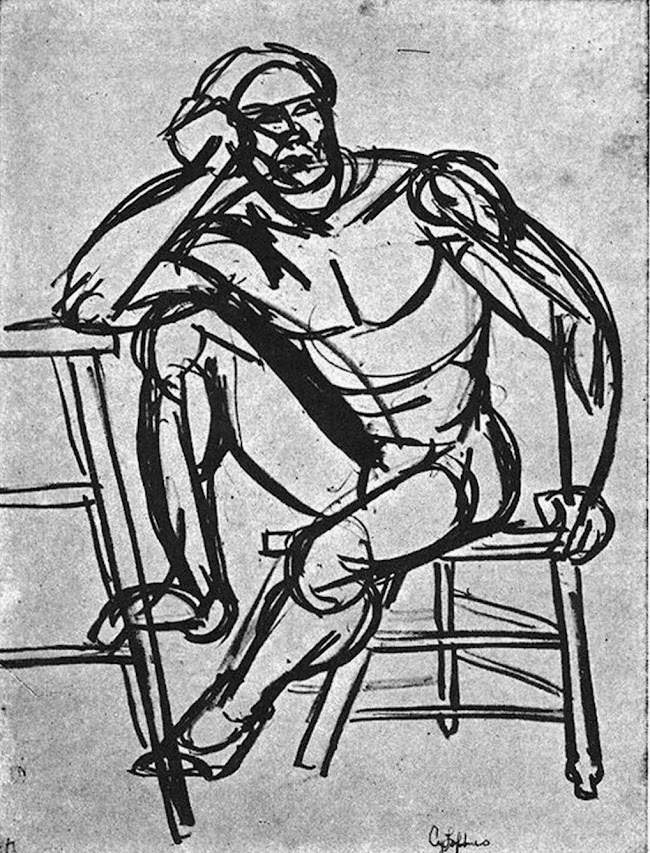 You are attempting something that might be called simplification, but I choose to call it emphasis. Try to select those lines, those forms, those rhythms, that speak specifically of the meaning of the whole gesture. A figure has one gesture. The parts are all there, but each plays a particular role — some the leading role, others a very secondary one. Others are silenced completely or become temporarily merged with other forms.

Draw for three hours as directed in Schedule 19 C.

On one side of the form there is usually a simplification of movement which suggests the holding power of the form. The movement is less broken and much stronger, serving as a motif or theme. On the opposite side there is variation or relief, which prevents the motif from being monotonous and at the same time identifies it through contrast. The need for variation is expressed in the old sayings that variety is the spice of life, and all work and no play makes Jack a dull boy. You would lose the sense of a thing without variation, just as you lose the sense of a word when it is repeated over and over. Variation gives rest to the spectator, allows him to relax at times, just as he does in any other phase of life. It is like the comic relief in a serious play.

If you exert force on an object, there is a reaction in exact proportion to the amount of energy acting, even though that reaction is not always observable. Press down with your arm on the table. Although the table cannot be said to move, actually it is pressing back (resisting) with an equal amount of force. Since it does not give, you think of it as being a force that reacts. As you press against the table, the downward movement of the arm is indicated in various muscles and bones. The reacting force is also indicated as you will see if you compare the arm pressing against the table with an arm hanging limp. For example, the bone at the shoulder appears to be pushed up although the arm is pushing down. The flesh of the arm is pressed in by the table. It is impossible for the arm to take on the appearance of pressing unless the table is there to resist. In the forms that you see, the primary downward movement provides the motif while the reacting force provides the variation. If there were not a reaction for every action, there would be destruction. If the table were not able to resist the pressure of your arm, it would collapse. Likewise, in a drawing there must be such an equalization of forces.

Draw for three hours as directed in Schedule 19 D.

In the moving figure, identical curves do not appear exactly opposite each other. If they did — or if you represented them in that way (Figure 1) — that part of the form would have a tendency to complete itself like a circle, thus destroying the continuity of the whole figure and preventing the eye from following the movement throughout it. These contours or forms are to be thought of as having an interlocking movement (Figure 2). Before the impulse of one has a chance to die out — in fact, at some place where it is reaching its crescendo of power — it is picked up by another and carried forward. Each impulse carries the momentum of the preceding one. (When you look at a diagram of a completely static or theoretical figure, you can see that the body is bilaterally symmetrical, having identical lines on the two sides. However, as soon as an actual figure moves — and we always think of the moving figure — this ceases to be apparent because movement is at work in the form.) 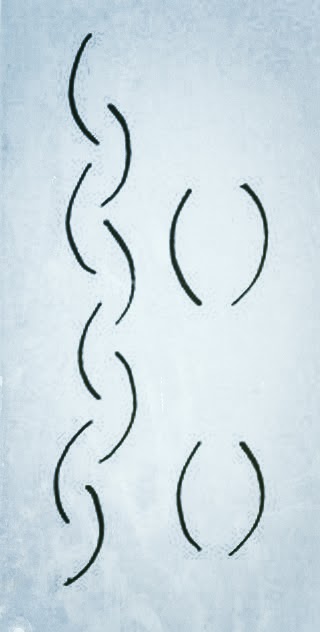 These exercises may seem awfully close to a certain kind of static pattern or decoration, but the difference is that we see the model through the gesture. When you think of design, think that the thing has been planned for a certain kind of movement. I never think of design as ornament. When you ornament a thing, you apply a substance or a treatment foreign to it after it is formed, whereas when you design a thing you organize it or plan it in the making. You change it by doing things to it — by cutting it down, moving it over, pushing it back.

As you do this, you are transposing facts to fit your needs of expression. These can be two separate things — they are. After a while the artist does this so instinctively that he thinks he is being perfectly natural. It becomes, after a while, the artist’s way of seeing things, which is necessarily different from the layman’s way of seeing things — a mechanic’s or a scientist’s. He sees them through the artist’s medium.

Draw for three hours as directed in Schedule 19 E.