* Use the same pose, nude throughout.
** Make gesture drawings of hands.

These are one-minute gesture studies which follow the directions for Exercise 2 with one new element. As you draw, still attempting to draw the whole figure, include some feeling of the movement of the bones within the figure. Record loosely the gesture of the spine, the general basket shape of the ribs, the basin of the pelvis, the ball of the skull, the wedge of the foot. Let the bones and the figure move as one thing.

Make a large fifteen-minute contour drawing of a hand and arm, including the elbow but not the shoulder. Put a piece of tracing paper over the drawing and spend the remainder of an hour in studying the bones of the hand and arm with the help of your anatomy charts. Having drawn the bones from the front, you can put a new piece of tracing paper over the contour and draw a back view of the same bones. When the hand turns, the elbow and the bone on the little finger side of the lower arm stand still, acting somewhat as an axis for the turn, while the thumb moves in a semicircular way. At the end of the turn the position of the hand is changed by the width of the hand.

Prove this to yourself by placing your hand and arm flat on a table, palm up. Moving your arm as little as possible, turn the palm of your hand down. You will see that the little finger remains in practically the same place on the table while the thumb has changed from its first position by twice the width of the hand. When the hand is held straight out, palm down, the top of the arm appears to overlap the hand whereas the bottom of the hand overlaps the arm. The bones from the wrist to the four knuckles vary in length, the bone to the middle finger being the longest. Therefore, the knuckle of the middle finger is highest when the fist is closed.

Draw for three hours as directed in Schedule 18 A.

Make a large contour study of the back view of the figure, including only the portion from the neck to the waist line. Then study the bones of the shoulder. The shoulder girdle is formed by the collarbone (clavicle) in front, and the shoulder blade (scapula) in the back with its attachment, the spine of the scapula, which is almost a separate bone. These bones should always be thought of together because they move together. The collarbone is very simple. It joins the breastbone (sternum) at the pit of the neck and extends across to the arm. The shoulder blade is shaped roughly like a triangle, slightly cupped over the ribs, with the inner side parallel to the spine. The outer side has a socket into which the armbone fits. The spine of the scapula is rib-shaped and slightly curved. It runs along the top of the shoulder blade and extends beyond it to a point near the end of the collarbone.

This you can see from your charts

The important thing to remember is that the movement of the arm controls the movement of the shoulder blade in this way: When the arm is lifted, the armbone pushes up the collarbone and the spine of the scapula, and this forces the bottom of the shoulder blade to swing out so that the inner side is no longer parallel to the spinal column. Ask your model to move his arms in various ways and watch this process. The term ‘shoulder girdle’ arises from the fact that the collarbone in the front and the two spines of the scapula in the back form a ‘girdle,’ somewhat elliptical in shape, which encircles the shoulders. You will see this clearly if you can get up above your model and look down on the top of his head. The neck rises up from the center of this ellipse.

Draw for three hours as directed in Schedule 18 B.

Make a large contour drawing of a leg, including the ankle and part of the hip. Then study the bones of the upper and lower leg and the knee. 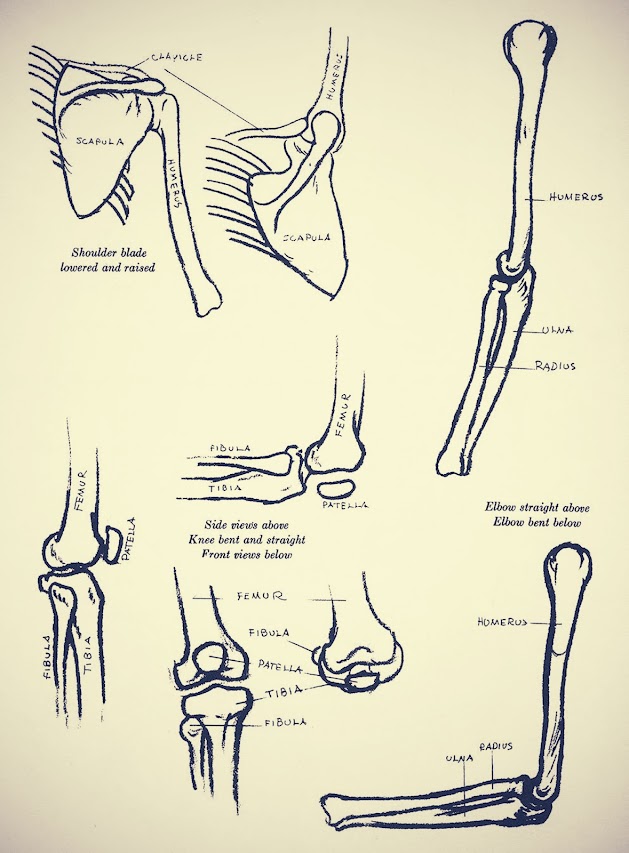 The mark made by the top ridge or crest of the pelvic bone (ilium) is clearly seen and, because of this, beginners usually imagine it to be the starting place of the leg. The truth is that the bone of the leg starts lower down although certain muscles of the leg go up beyond the leg and are fastened under the crest of the pelvic bone. The bone of the upper leg slants inward from the pelvis to the knee whereas the bones of the lower leg are more nearly perpendicular. This seems obvious when you observe that the body is wider at the hips than it is at the knees. The bone of the upper leg (femur) is shaped at the top like a hammer that is striking into a socket in the pelvic bone. 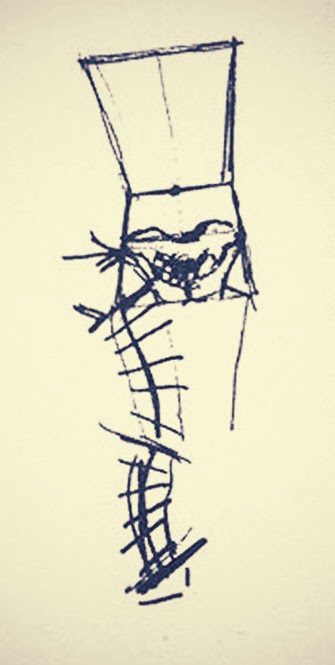 The lower leg has two bones. The larger (tibia) is on the inner side of the leg and starts higher at the knee and stops higher at the foot. The smaller (fibula) starts lower at the knee and runs down lower at the foot. Therefore, the ankle seems higher on the inside than on the outside. The lower leg is not set directly under the upper leg. From the front you see that it is set toward the outside. From the side you see that it is set toward the back. This offsetting of the bones creates a spring-like arrangement which acts as a shock absorber. If the lower leg were set directly under the upper leg, the shocks received by stepping and jumping would be transmitted from the foot in a straight line to the thigh. The thigh would not last very long, just as a wagon would not last very long if the wheel were fastened under it by a straight vertical rod instead of a spring. This principle of offsetting works throughout the body, even including the fingers.

Draw for three hours as directed in Schedule 18 C.

Make a large contour drawing of a foot and ankle and then study the bones of the foot. The two bones of the lower leg grip the foot like a pair of ice tongs so that the foot appears to be set up into the leg. From the side you see that the foot is like an arch. The anklebone (astragalus), which is directly under the leg, is the keystone of the arch and supports the weight of the body. Behind that is the heel and in front are the long bones of the foot. These three make the arch.

Draw for three hours as directed in Schedule 18 D.

Make two large fifteen-minute contour drawings of the eye, a front view and a side view. The socket of the eye is simply a big hole in the skull. In that is placed the eyeball, of which only a small part is seen. The eyelids, upper and lower, rest on this ball and their form therefore follows it — that is, the lids move back from the center of the ball into the face and have a ball-like form, which is instantly obvious when the eyelids are closed. The upper lid has an awning-like movement. It is longer than the lower lid and extends farther out at the corners. The highest point of the curve of the upper lid is not directly opposite the lowest point of the lower lid because the upper lid follows the shape of the forehead while the lower lid follows the cheekbone.

Make two large fifteen-minute contour drawings of the ear, a front view and a side view. The ear fundamentally is a little funnel. Do not think of it, as many people do, as a kind of design stuck on the side of the head. Keep in mind the fact that all the little lines and forms are made to catch the sound and carry it around so that it enters the hole of the ear. All the channels lead into the funnel.

Our discussion of anatomy is not intended to take the place of any of the numerous books on anatomy which are in use. I am merely striking a few high points. These are points which dramatize the form and the movement. Using them as a guide, or an exmple, you will proceed to concentrate on whatever part of the structure is puzzling you most in future study of the bones (Exercise 33). Never lose sight of the dramatic phases of the construction. Think of the bones in terms of what they enable the body to do.

Draw for three hours as directed in Schedule 18 E.