Materials: In addition to cream manila and tracing paper, you will need an HB drawing pencil for tracing the contour and a sheet of rough-toothed, medium gray paper, such as construction paper, or a cheap pastel or charcoal paper. The sheet may be fifteen by twenty inches in size or larger, as eighteen by twenty-four. For the modelling, use any two of the following (one black and one white) or all of them: a black Conte crayon, medium; a white Conte crayon, medium; a Wolfe carbon pencil, medium or soft; a white Conte pencil, medium; a piece of white blackboard chalk. Later you may substitute paper of various colors or brown manila wrapping paper for the gray paper.

EXERCISE 35: THE SUSTAINED STUDY IN CRAYON 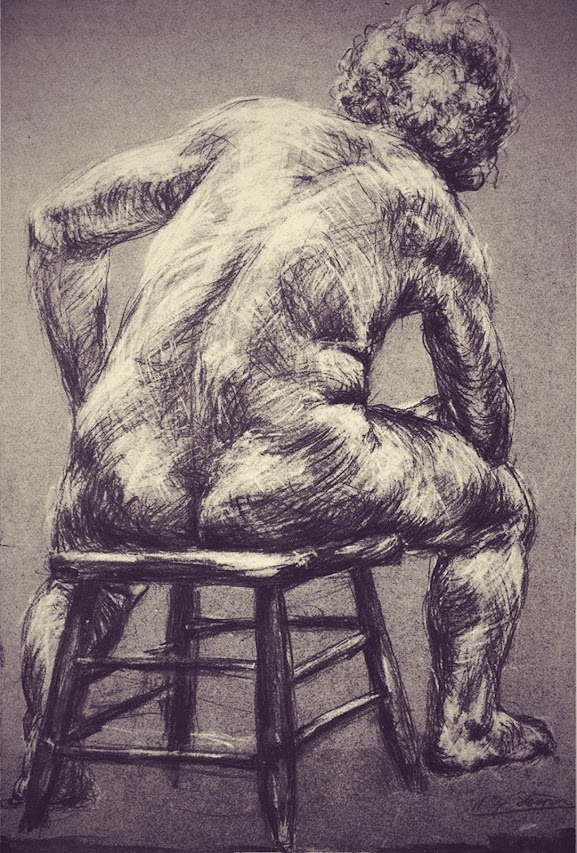 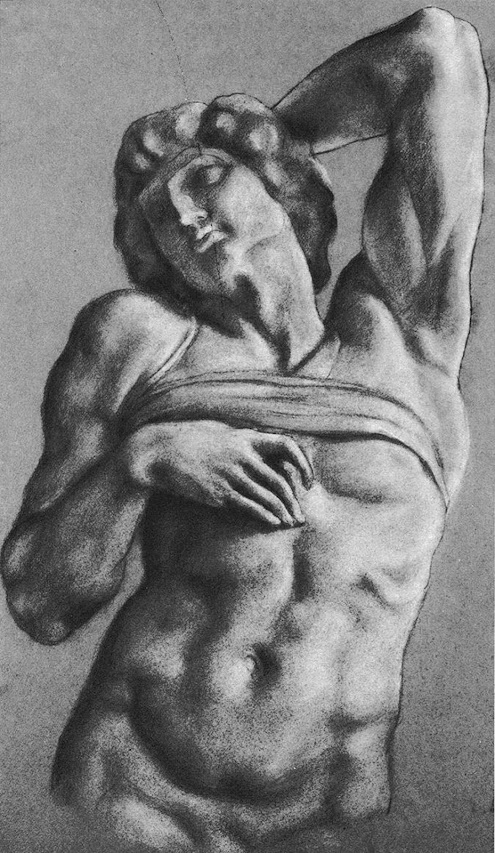 The first two steps in this study are identical with those of the sustained study in pencil (Exercise 32) — an extended gesture study in pencil on manila paper and a contour study made over it on tracing paper. It then becomes necessary to transfer the contour to the gray paper. Do this by blacking the space around the lines on the back of your contour study with a Wolfe carbon pencil. (Do not use lead pencil for this purpose because the graphite would repel the carbon which you are to use later for modelling.) Then place the contour drawing right side up over the gray paper and go over the contours with the HB pencil, pressing hard enough for the lines to show on the gray paper but not hard enough to make grooves in it. 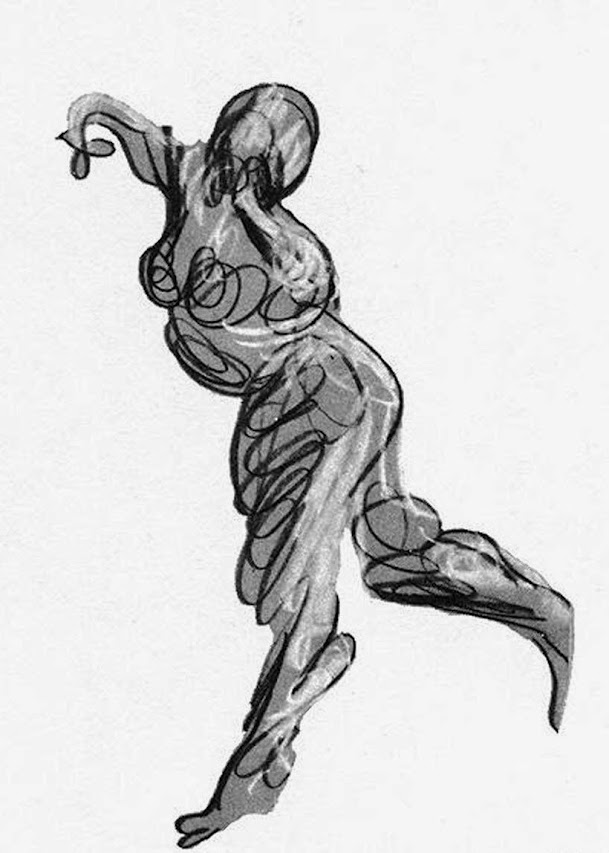 The tracing is apt to become mechanical because, as you move your pencil over the lines, you lose consciousness of what those lines mean and are. This mechanical and diagrammatic look can be avoided if while tracing you hold to the feeling you had while making the original contour study, moving your pencil in the same sensitive, seeking, and slow manner. Even when tracing, you can’t make a swift line slowly or a slow line swiftly. The experience must be simultaneous with the drawing. When the tracing is finished, you will find that you have a clean-cut contour on the gray paper, the lines of which are in carbon pencil. Soften these lines with a kneaded eraser, or with art gum, so that it will be necessary to re-study them as you build up this drawing. 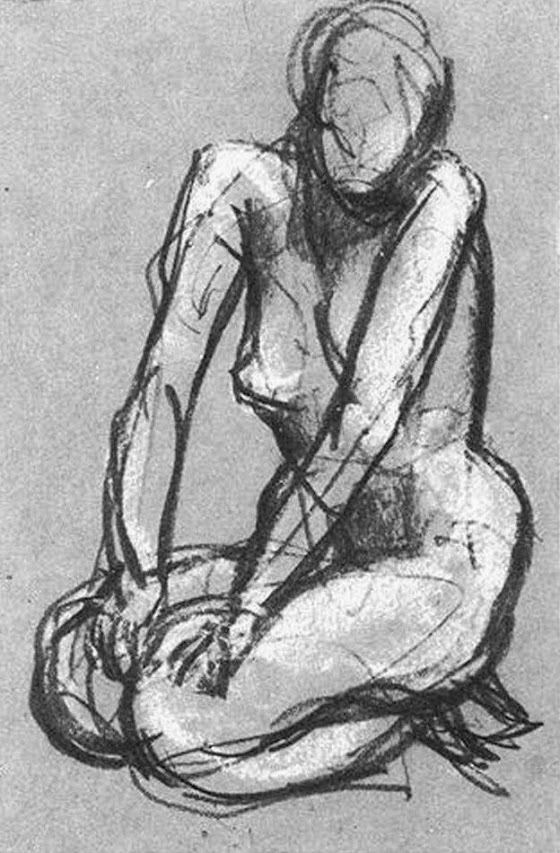 I have found that some students are more successful when they start modelling with the black crayon or pencil and others with the white. It is immaterial which you use in the beginning. Assume that you start with the black. Model just as you did in the modelled drawings except that now you model only the dark parts, remembering that you think of those parts, not as shadow, but as form moving in space. Then change to the white pencil or crayon and model those parts on which the light falls, with more feeling of what they are doing than of what the light is doing. Eliminate cast shadows. You cannot remove the contour when you are through with it as you did in the pencil study. Therefore, it is continually necessary to relate the contour, which is already on the paper, to the modelling, and the contour as it first existed will change. Sometimes you will find yourself pressing it back, sometimes erasing it or parts of it. In other words, to a certain extent you model the contour. All of this is done with the sense of making an actual physical contact with the model. 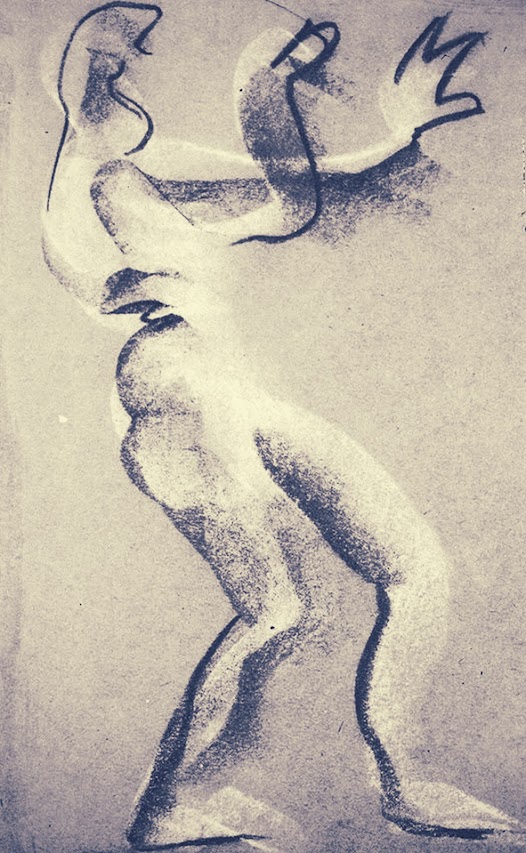 I have often found students to be self-conscious in the attempt to utilize the gray of the paper, carefully leaving it as a middle tone between the light and the dark. When this happens, it means that the student has not understood the full meaning of the directions. He has not tied up this exercise with the experience of the modelled drawing. As the form comes toward you, you push less hard with the black crayon until finally you lift it. As the form goes away, you push less hard with the white crayon until you lift it. Where those parts meet the gray paper may show through in places, but there is no feeling that you have failed to touch the form there. You are not thinking of the drawing but of the model. As you continue to go over the forms, trying to make them clearer, you may find yourself changing the crayon frequently. The black and the white may mingle or one may intrude into the area of the other. Do not be afraid of overworking the drawing.

EXERCISE 36: GESTURE IN BLACK AND WHITE

Materials: Use a black and a white Conte crayon (or charcoal and blackboard chalk) and a small piece of rough gray paper about ten by fifteen inches in size (or of dark brown manila wrapping paper which has sufficient tooth). As you proceed, use paper of as many different colors as you can acquire. (A cheap ‘construction paper’ may be bought in ten-cent stores or school supply stores).

This exercise is the twin brother of our very first gesture exercise although we dress it a little differently. Go back to the first things we said about gesture, in Sections 1 and 2, and relate them to this exercise in the light of your present knowledge. The model poses for a minute or less and you draw in a simple manner with the black crayon, seeking the impulse of the gesture, keeping the crayon on the paper and moving loosely from top to bottom and around. Change quickly to the white crayon and do exactly the same thing. After some practice make this one change: 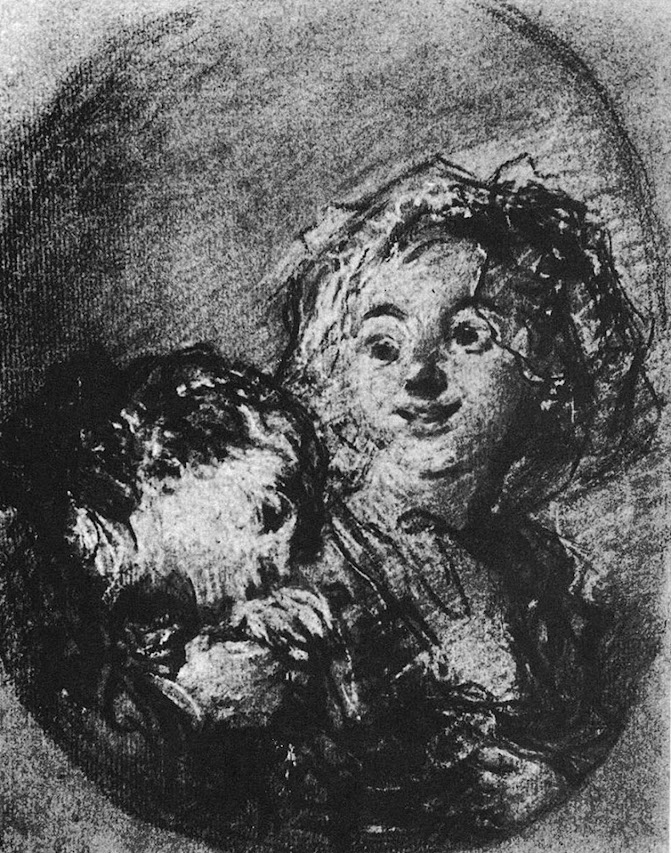 The Hand Kiss by Fragonard

But there should be no conscious attempt to isolate the patches of white from the patches of black even if, as sometimes happens, large dark shadows completely separate the lighted areas. This is not an exercise in light and shade. Continue to feel the unity of the body through the attempt to follow the gesture. This may sound contradictory but it is not. You are thinking of the whole gesture, the whole movement, but naturally, because you are using two colors, you will find yourself subconsciously influenced by the light and shade.

EXERCISE 37: DRAPERY IN BLACK AND WHITE

Using the materials listed in Exercise 35, make a long study of drapery on a piece of gray paper, using light and shade but always feeling the form. Devote to it as much time as you can and will outside of your regular work in the next three schedules.

Draw for fifteen hours as directed in Schedule 17.