Section 15. An Approach to the Study of Anatomy

• The model poses nude, as for the sustained study.

The Basis of Action

The human figure is built for action, and the best approach to the study of anatomy is that which constantly relates the anatomy of the figure to the possibility of movement. The shapes of the body in action are entirely different from those of the dormant body. It is the gesture that gives everything its shape. The bones and muscles have been modelled into their form by action, through centuries of existence, and those forms are not static. If anatomy were illogical it would be terribly difficult, but this basis of action makes it logical. What you need mainly to know is the movement of the figure and its limitations — where it can and cannot move.

Books on anatomy do not make it sufficiently clear that the muscles and bones are all covered with fat and flesh and that the nude figure is the bones, the muscles, the fat, and the flesh as a unit. There are times when these muscles merge with one another in their action or lack of action under the cover of this fat and flesh so as to create a unit of almost abstract form. That is, you do not think of bones or muscles or flesh separately, but as a unit. It becomes itself, a new thing, and it must eventually be thought of as that new thing.

A Means to an End

Anatomy in the hands of the artist is merely another instrument for making the figure articulate and clear. It is never to be thought of as an end in itself but only as a means to an end. It is quite possible for a student to acquire sufficient knowledge of anatomy through his knowledge of the figure without having made any special study of the subject or ever even having heard the word. The archaic Greeks knew little of anatomy and their figures are anatomically inaccurate, but they constitute great works of art. The knowledge of anatomy can become an interesting thing for itself without regard to art, but purely anatomical drawings of the figure are like the drawings a botanist without art training might make of flowers. They are good diagrams but are unimportant as far as art is concerned. The student who self-consciously displays his knowledge of anatomy on every occasion is apt to be as boring and as impotent as the kind of person who feels it necessary to parade his information on any other subject.

Anatomy is the one study on which I do not advise students to concentrate in the beginning. Rather, approach it lightly and casually in the same way that you would make drawings during a telephone conversation. Think less of the anatomy than of the figure as you know it, fitting the anatomy into your knowledge of the figure even though your knowledge is not yet exactly correct. I have seen so often a lot of waste energy, disillusionment, and disappointment among students because nothing ‘works’ in the beginning. It takes many drawings, many efforts, to relate the information in anatomy charts to what you know of the figure through your other experience with it. Therefore, it is better not to take the study too seriously at first or to devote too much time to it. But it should be continued and, if it is, the anatomy will become comprehensible and you will find yourself more interested, more serious about it, and more able to concentrate.

EXERCISE 33: STUDY OF THE BONES

Materials: For the exercises described in this book you will need a set of practical, cheap anatomy charts. Suitable charts may be ordered from the Art Students’ League, 215 West 57th Street, New York City, if they are not available at your local book or art store. For the student who wishes later to go deeply and thoroughly into the study of anatomy, there are no better books on the subject than those of George B. Bridgman. 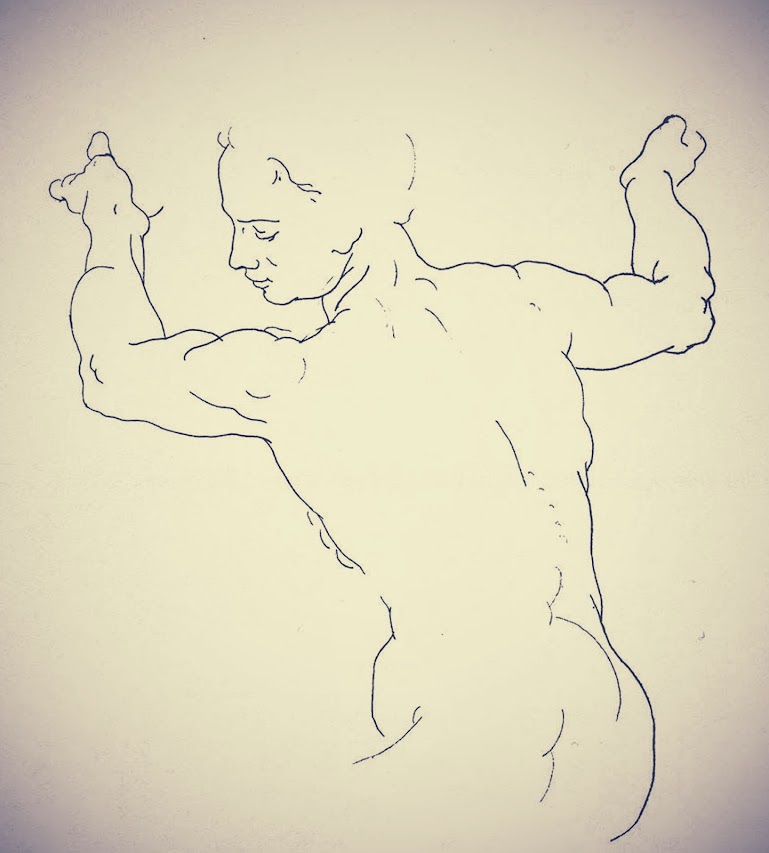 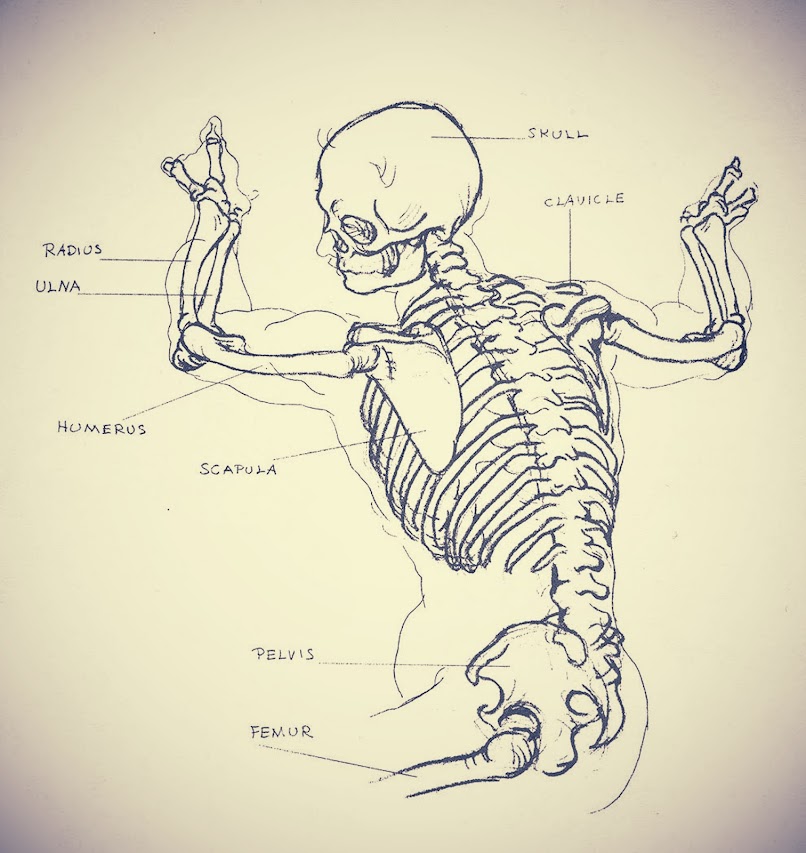 Place a new piece of tracing paper over the contour drawing (nude) which you made for the current sustained study and place a chart of the full-length skeleton before you. With your softest pencil or a piece of charcoal sketch in the bones as well as you are able, attempting to make them fit into their proper place in your drawing of the figure. They should be sketched in loosely in the spirit of a gesture drawing, following the action of the figure with little regard for the shape of the individual bones. To guide you, you have the chart, the model, who is still posing, and your contour study. There are certain places on the figure where the bones come close to the surface, showing clearly under the flesh. These places help you to place the bones correctly and you should correlate them on the drawing, the model, and the chart. This part of the study should not take more than fifteen minutes. During the rest of the hour develop the bones in more detail, using the charts of the separate bones. But even here you are not to worry about the exact shapes of the bones except as they affect the shape of the figure. Study their capacity for movement.

The Use of Antique Casts

Small antique casts of the full-length nude figure may be used for the exercises in anatomy if you are unable to secure a nude model. Purchase first one and then others as you can afford and need them. If you use a cast, you will, of course, make a sustained study of it, the contour drawing of the cast being used as the basis for anatomy study. These casts may be used in a number of ways. Place them in various positions — at an angle or tilted — for quick or long studies. Draw them draped either with cloth or with thin wrapping paper. Use them as models for living subjects in compositions of your own. Later, when you begin to paint, you can paint them in flesh colors, looking at the statue as a guide to values.

Draw for fifteen hours as directed in Schedule 15.