Section 9. An Approach to the Subject of Technique

In Schedule 9 you will devote the long poses to modelled drawing with pen and ink. If you like, you may choose a finer point than before and work rather minutely, spending several hours on one drawing. Or you may combine this exercise with Exercise 22 and make several drawings of parts of the figure. You are asked to put down only your sensation of the weight of the figure and of the forms going back or coming forward. This may be done, of course, with any sort of strokes — rotating or angular, heavy or fine. The way you use the pen is unimportant.

In half-hour studies you probably won’t find it necessary to do quite as much filling-in as formerly. The lines may become fewer and should move in the most expedient manner in relation to your feeling of the form and its movement, its depressions and elevations. In other words, some of the feeling of the gesture studies may begin to creep into your half-hour studies. Keep working over the whole figure at once. If you are drawing objects, you have probably limited yourself to single things up to now. Put several things together and make a study of them that will occupy several hours. Collect any of the objects you happen to see around you. These are examples:

(1) A large piece of paper folded as if it were corrugated, a wagon wheel, a chain, a dish mop, a bit.
(2) A pin cushion, a victrola record, a shutter, the divider from an ice tray, radio tubes.

Go to the workshop, the kitchen, or the junk pile and pick up anything you happen to see. The act of putting these things together may be made into an exercise in gesture. Combine them in such a way that one movement may be felt in the whole group. 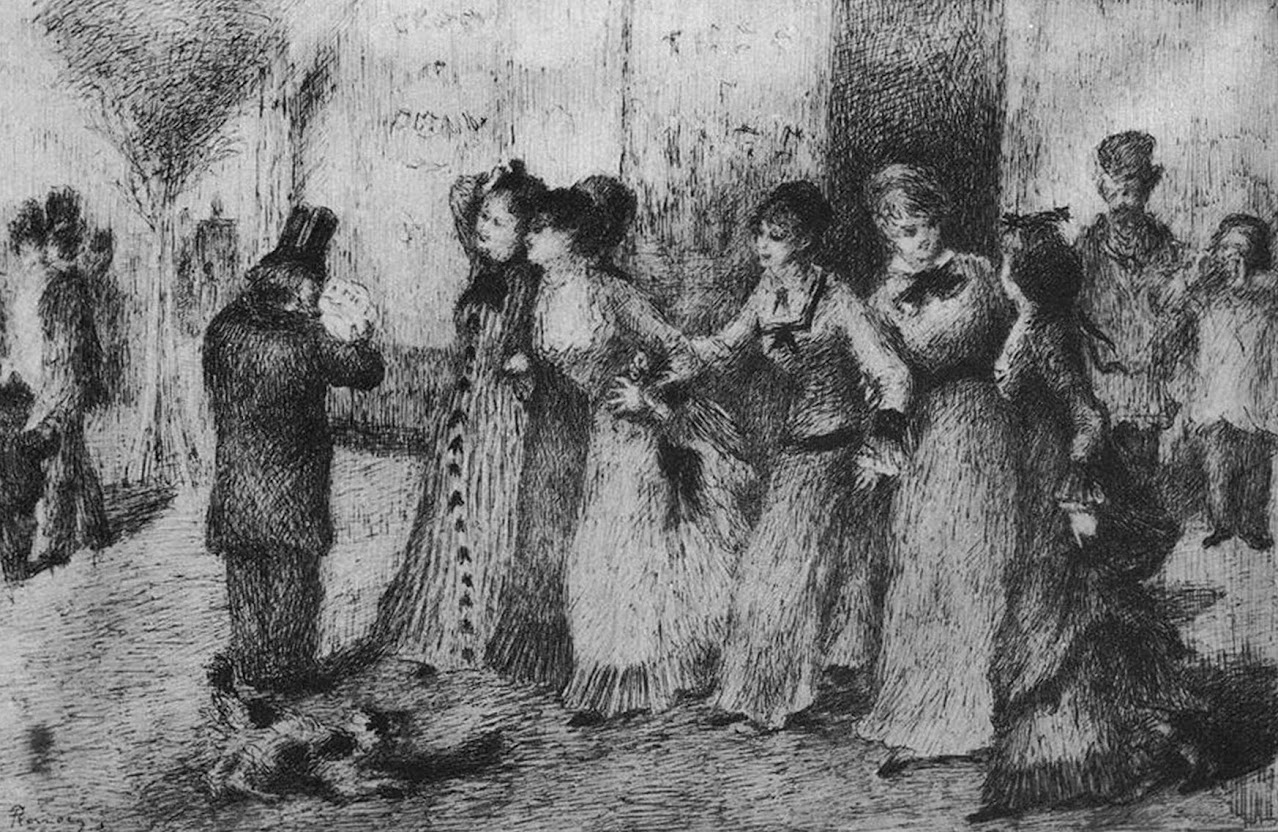 L’Assommoir by Renoir
Press back inhere the form goes back and lightly where it is near you. (Compare Exercises 13 and 24)

Draw for three hours as directed in Schedule 9 A.

Any student can command a good technique in a few years and acquire facility with his medium, but this is not what real study consists of. Anyone can learn to paint. Sometimes it seems that the less one is an artist the more easily and quickly one can acquire the superficial qualities of a painter, but craftsmanship in painting is mere virtuosity, a skill that may hide lack of real perception. Technique should be taught, not as an end in itself, but as something related to individual expression, as a means toward an end. One cannot separate technique from expression. There is only expression. The physical command of painting, the sureness, comes of practice with the painter’s materials. The act of creating art comes of practice with the materials of the artist. They are two different things.

Their proper relationship is established by emphasis on the practice of art. All that you need in the way of technique for drawing is bound up in the technique of seeing — that is, of understanding, which after all is mainly dependent on feeling. If you attempt to see in the way prescribed by any mechanical system of drawing, old or new, you will lose the understanding of the fundamental impulse. Your drawing becomes a meaningless diagram and the time so spent is wasted. The actor who overacts makes his mistake, not because of lack of technique, but because he has not had sufficient practice in truly feeling his part. In fact, his desire for technique has thwarted his natural power to feel correctly, or — and most likely — he has had poor direction in the beginning. By poor direction I mean that his training emphasized technique of presentation instead of sending him to life with an eagerness to see nature through his ability to feel.

Draw for three hours as directed in Schedule 9 B.

Often when you seem to have controlled a medium, the medium is really controlling you, so in the formative years it is not wise to give yourself up entirely to any one medium. Later, having had a real experience with various mediums, the artist finds those which are best suited to his method of working, his temperament, and what he has to say. As he grows older, he naturally settles down to the technique from which he can get the best results. That is normal. He finds it necessary to conserve his physical energy and becomes more concerned with leaving some imprint of himself. Therefore, the time to be experimental is when you are young. For you to settle now into a way of doing something is bad. You cannot say, ‘This is my way — I can do it best this way.’ You don’t know until you have tried other ways, and by trying I mean not for a week but for several years.

The great artists, even if they developed a way of painting which was recognizably theirs, never really stopped experimenting. Titian, for example, continued to use different techniques until the end of his long life. Renoir grew even more experimental as he grew older. It is not that the artist is consciously trying to change his technique. He is changing his attitude to form and color — in fact, to life — and his technique naturally changes, whereas if he were bound by considerations of technique his development would become cramped.

Committing oneself to a technique causes stagnation. Naturally you will become more interested in your method as you work, but you should never forget the main objective — an experience, real, that you wish to re-experience in your medium. The bad feature of commercializing your attitude to your work is that your end becomes a picture rather than an experience. It is equally bad, however, to become a conscious amateur, a dilettante. The serious student is one who wants to go ahead for the simple reason that he feels a pride in growth.

Draw for three hours as directed in Schedule 9 C.

Some students think, when they have paid for their art tuition, that they are buying outright some categorical system of instruction. They want to be told in black and white exactly how to make a certain kind of picture. In this book I am trying to give you ideas to work with rather than ways to work. I have been definite about the materials you use, the subjects you work from, the time you spend. Beyond that there is no valid way for me to be definite. You must be willing to use your own mind and draw your own conclusions. As long as you draw, each subject will present a unique problem and will demand alert observation. I am not trying to show you how to master a few specific problems but to give you a basis from which to work in future. Sometimes when I see a student struggling with a particular difficulty, it is hard to refrain from giving him a practical clue to its solution. But I know from experience that, if I can force myself to leave him alone long enough, the solution he eventually reaches will have more personal truth for him than any that I could suggest.

Do not try to learn a formula, but to become sensitive, to feel more deeply. Do not try to master a particular technique. Progress has been made by the people who refused to submit themselves to mediums. The rules of technique have been made by people who copied those who made the progress. You will paint well when you are able to forget that you are painting at all. When you are conscious of your medium, things become difficult, but when your interest is completely absorbed by the model — the idea — your materials become easier and easier to handle. Therefore, practice is the watchword. If your drawing is the best you can do, it suffices. No human being can do better. The best you can do today will not compare with the best you can do a year from now. What I hope is that after two years you will still be doing the best you can.

Draw for three hours as directed in Schedule 9 D.

EXERCISE 25: BACK TO THE MODEL

Sit with your back to the model during a half-hour pose. Look around at the model as much as you want to and draw just as usual, but don’t move your chair. You will find it such a strain to turn around that you will look at the model as seldom as possible, and when you look you will really look.

Draw for three hours as directed in Schedule 9 E.