Today you will begin the practice of the modelled drawing in a third medium — water color. Each medium that you use should enrich the others. Practice with pen and ink, for example, contributes something to the use of water color which practice with water color alone cannot give, making it fuller and more varied as a medium of expression. As far apart as etching and oil painting are, the one contributes to the other as in the work of Rembrandt. This change of medium might be likened to a change of language. The experience of using two languages makes each more rich than it can possibly be by itself. And, more important, the attempt to convey a thought from one language to another makes possible a finer comprehension of the thought.

We are all prone to accept our preconceptions instead of investigating a thing fully and anew. Once we have had an experience, the repetition of the experience becomes muffled and not clear. We anticipate and in anticipating we lose the significance, the meaningful detail. The very difficulties of using a new medium, like the difficulties of using a new language, tend to bring you back to the meaning you desire to convey, because the medium can be used properly only in relation to your grasp of the meaning. 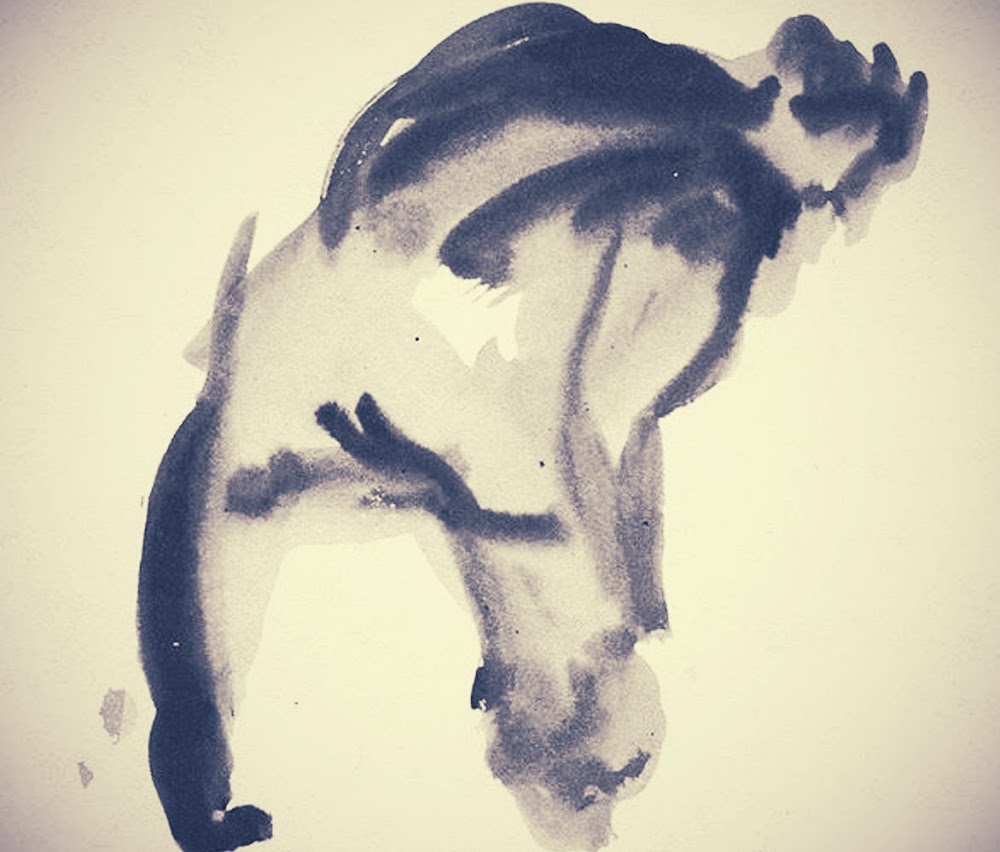 Materials: Use large sheets of cream-colored manila paper (fifteen by twenty inches) and three tubes of cheap water color — yellow ochre, burnt sienna, and black. It is important that you should use tube colors and that you should use only the three colors named. Do not use water color paper, even if you can afford to; the tough manila paper is better for this exercise. You will need one sable water color brush, which should be quite large (size 9) and of the best quality you can afford. Use a cheap water color pan to mix the colors in, a glass of water, and several soft clean rags about six inches square.

This is essentially the same exercise as the modelled drawing in lithograph crayon, but, naturally, whether you press lightly or hard with a brush-load of color makes no difference in the lightness or darkness of the color that appears on the paper. Therefore, you will use the dark colors to give the sensation of pressing back that you have gotten previously by actually pressing with the crayon or pen.

Use the lightest color (yellow ochre) for the first step, the building up of the form from the center to the outside surfaces. For the next step, touching the vertical and horizontal contours, mix burnt sienna and black until you get a sort of chocolate color, with which you model the forms before the yellow ochre is too dry. Keep the whole thing going at once and, as before, pay no attention to edges. If a time comes when the paper is so wet that it refuses to take any more color without spreading it meaninglessly, start another study and keep the two going at once. Work on one while the other dries a little. Keep the brush fairly dry by wiping it with the rag before dipping it into the color. In the first stage, building up with yellow ochre, the brush will be wetter than in the second stage. Keep the color full and thick. Fill the brush with it, using plenty of pigment. It should not be thin and watery.

The use of water color in this exercise has nothing to do with water-color technique or with ‘color.’ It is simply an exercise in drawing for which we use a color roughly approximating that of flesh, instead of black. It will not approximate the color of many things you draw, but that does not matter. You should not think now of trying to reproduce any color that you may see. Work exactly as you did with the crayon and the pen, bringing the form forward when it is nearer you and pushing it back as it goes away from you. With the crayon you could push the surfaces back away from you by pressing harder. Here you must do it by letting the color get darker. That is the only difference.

Draw for six hours as directed in Schedule 6 A and 6 B. 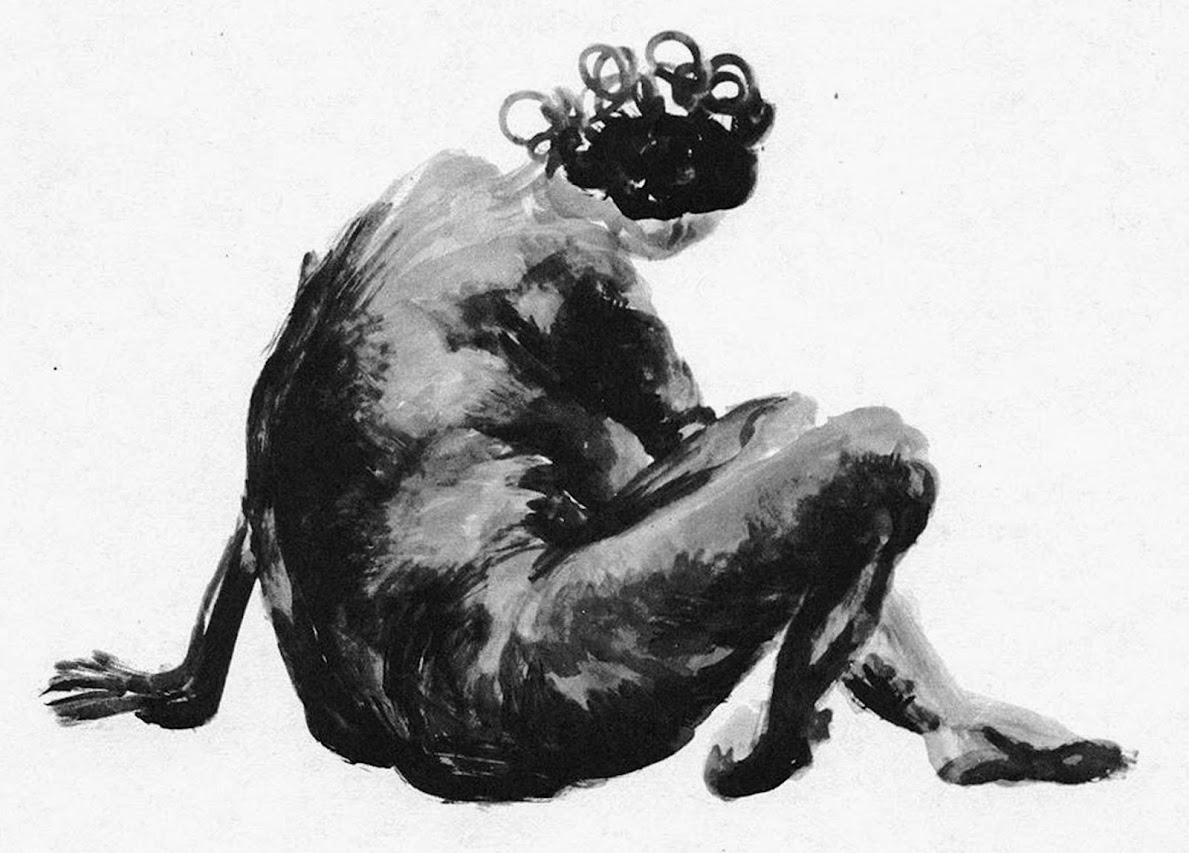 Work from a half-hour pose, using pencil and a large sheet of paper. The following pose may be used the first time the exercise is attempted:

The model sits erect on the left side of his chair directly facing you, the right knee straight forward with the right foot directly under it, the left foot pulled back with the toe placed on the floor directly under the left thigh, the right hand resting on the right knee and facing forward, the left hand at the waist. During the first half of the pose, draw, not what you see, but what you think you would see if you were sitting at the left side of the model instead of in front of him. In the pose described above you see a front view, but you will draw from imagination a profile view.

First attempt to visualize the relation of the feet to one another and to the chair, because the chair is responsible for the conditions in which the gesture took place. To your imagination it will appear that the model’s right foot is to the left of the chair; that the left foot touches or is very near the back leg of the chair, that the left knee is not as far advanced as the right knee, that the left elbow directly faces you somewhat above the waist, and that the right elbow is bent. The drawing is to be done as much as possible in the spirit of a gesture drawing. Naturally you will have to stop to think, to figure out where the various parts are in relation to each other, but think always of what they are doing. Devote the remainder of the pose to a ‘check-up’ when you will actually go to the position from which you imagined the figure and note the difference between the actual pose and the drawing you made.

The first thing to note is the unity of the gesture, as in any other kind of drawing. Do not correct your drawing or try to make a new one. Simply notice your mistakes. Of course you will not always have a front view of the model for this exercise and if several people are working together they will all have different views. But the principle remains the same. We call this ‘right-angle study’ because if you drew a line from the place you are sitting to the model, and another line from the place you imagine you are sitting to the model, those two lines would be at right angles to each other. In the accompanying diagram the capital letters A, B, C, and D represent four students working from the same model. The first student is actually sitting at the place marked A.

He imagines that he is sitting at the place marked a and for the check-up he actually goes to the place marked a. Do not limit yourself to the human figure. Look at a telephone, a lamp post, or a lawn mower and draw it as it would appear from a ‘ right-angle ’ view. This will force you to acquire a sound knowledge of the way the thing is constructed.

For the present you are to consider none of the small details of the figure in this exercise but only the gesture. Later, you may devote an hour to each right-angle study, drawing lightly in the beginning so that an eraser may be used and then carrying it forward with all the skill of draughtsmanship you possess; but always begin with a gesture study. In the check-up for a one-hour study, make a second drawing. As you progress you can make use of the same kind of effort to go further in the way of detail. For example, having the front view of a knee, you can make a right-angle study of the side view, utilizing whatever knowledge of anatomy you possess at that stage.

Draw for three hours as directed in Schedule 6 C.

In right-angle drawing we are making use of something which I have called, for lack of a better name, ‘structural imagination.’ Some of my students have asked if this exercise is a matter of using the imagination. To answer that, it would be necessary to define imagination, which is far from our purpose. What we really do in this particular exercise is to attempt to assemble from a different visual point of view what is actually in front of us. It is an effort to construct in the mind by using the residue of knowledge from past experiences. The same principle is at work in the descriptive and reverse poses and in other exercises which are to come.

The great danger of drawing the thing which is in front of you is always that you may end by merely copying what the eye records. When you cannot copy by using the eyes, you must draw with your full intelligence in relation to the past experiences of your senses. The fact that there is an attempt on your part to visualize a pose through your experience and that you are then given the opportunity to see such a pose will promote keener observation. A real appetite is created for the study which follows when you look at the thing you have tried to visualize.

Draw for six hours as directed in Schedule 6 D and 6 E.