Section 5. The Modelled Drawing in Ink — The Daily Composition

The Limitations of Preconceived Ideas

In learning to draw, it is necessary to start back of the limitations that casual information sets upon you. Preconceived ideas about things with which you have no real experience have a tendency to defeat the acquiring of real knowledge. One handicap that people have in looking at a painting is that they relate it, not to an actuality, but to other pictures of which they have accidental knowledge. Watch a child draw a house. He has in mind no picture that he has ever seen, no system for representing shingles or brick — unless he has been spoiled by the wrong kind of instruction. In his mind is an actual house, which he feels he is actually building as he draws. I watched one of my sons draw a dragon when he was about four years old. He contorted his own face and muscles as he drew and seemed actually to be afraid of the thing when he saw it on the paper. We think too often of the thing we draw in terms of the ways we have seen it drawn.

Think of the figure, not as if painted by Titian or Renoir, but as actual flesh and bones. If you make drawings of a knee until you are a hundred years old, your conception of it will still be far from what a knee actually is. Many painters learn to paint a knee in a certain way during their first year in art school and go on painting the same knee for the rest of their lives. Do not allow familiar labels to interfere with fresh impulses. Disregard ideas that are already formulated, or constantly test them by new fresh experiences. Realize the actual existence of an arm or a leg in space as contrasted with the idea of an arm or a leg. The only way around the limits of our preconceived notions is the physical action of the five senses.

You must get at a direct contact with the model. There is much talk about ‘beauty’ and much talk about ‘truth,’ but all the student need concern himself with is reality — that natural reality which he recognizes in normal everyday life and which establishes itself in his mind through his senses. Do not miss the sort of thrust which says that this is sand, this is water, these are trees. Remember that trees could be cut up and made into some sort of lumber. Water is heavy and wet — it is not just so much color. Do not look at a woods interior as spots of green, but get into it and realize that there are trees in between other trees.

Beginning with Schedule 5 B, practice the Daily Composition (Ex. 14) every day. 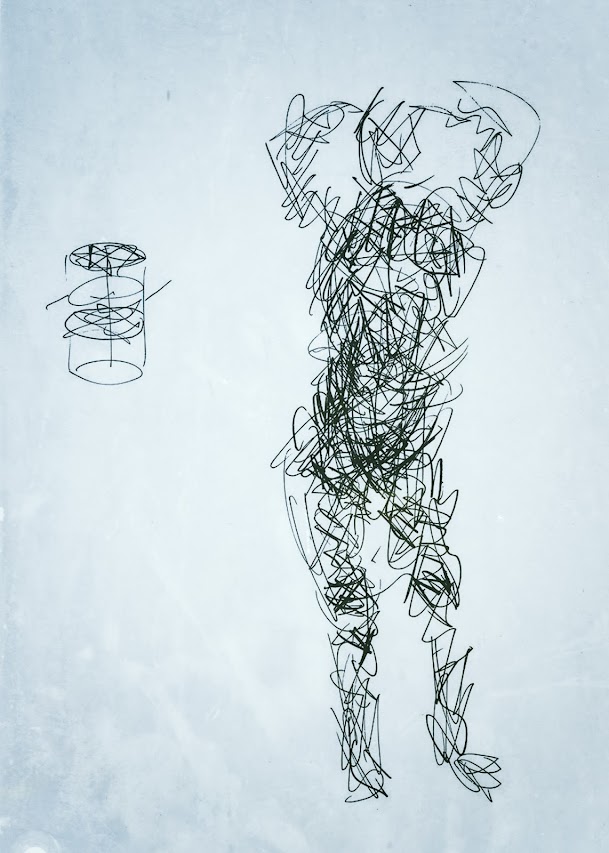 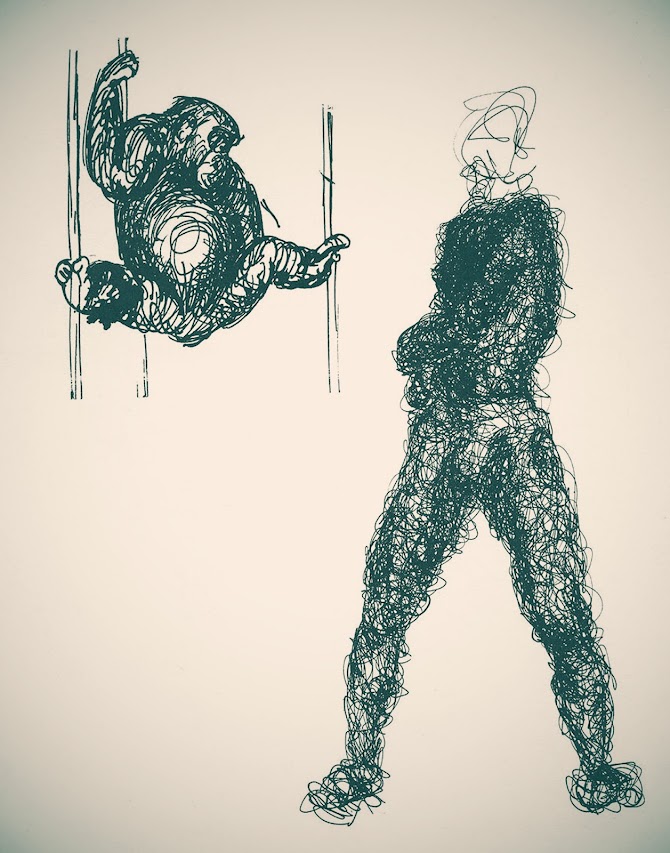 EXERCISE 13: THE MODELLED DRAWING IN INK

Materials: Use large sheets of cream manila paper (fifteen by twenty inches), black drawing ink, and an ordinary pen and penpoint. The point should be large and strong and blunt, preferably with a ball-shaped tip, so that it will move easily in any direction. Do not use a fountain pen.

This exercise is exactly like the modelled drawing in lithograph except that you have only the point of the pen with which to make contact instead of the broad surface of the crayon and consequently it becomes necessary to do a great deal of scratching around. Start in the center of the form and make in the beginning the same sort of rotating movement that you made with the crayon, constantly filling in the form and working out toward all the surfaces. Keep the pen moving over the paper in all directions without lifting ‘it. Then, as with the lithograph crayon, make contact with the vertical and horizontal contours, pressing back where the form goes back and lightly where it is near you. Remember that there will be no outline because you do not think of edges. Do not be timorous or hesitant. Press hard, even if the pen tears into the paper and makes huge blots. Work freely and vigorously. Do not hesitate to keep working over the forms until your drawing is completely black.

Draw for three hours as directed in Schedule 5 A.

This is a memory drawing, to be done in scribbled gesture style, but instead of drawing a single figure or object you are to show the human being in relation to his environment. Working in pencil, make a small drawing (about five by seven inches in size) of something you have seen during the past twenty-four hours. Put down as fast and easily as possible, and in any order, the various things you remember about a specific place and what was going on there. No more than fifteen minutes should be spent on one drawing. Make no corrections or alterations later, but go on to a new one the next day. Do not feel that the compositions should be complicated or, because they indicate more complete pictures, that they ought to be story-telling in a dramatic sense. Do not try to make something difficult out of them. The following list will illustrate the simple type of subject matter desired:

(1) A person getting into a street car or automobile.
(2) A woman examining merchandise either in or on the outside of a store.
(3) A man lighting a cigar or cigarette or pipe.
(4) A shoe-black at work.
(5) A man paying his check in a restaurant.
(6) Children playing.
(7) A woman in a beauty parlor.

Any of the casual and usual activities around you will make suitable subjects. If you find that you are frequently at a loss for something to draw, make in advance a week’s schedule of the places you will use for the daily composition and go to the place when the day comes. For example: Monday, drugstore; Tuesday, restaurant; Wednesday, barber shop; Thursday, cigar store; Friday, lobby of a motion-picture theater; Saturday, elevator lobby of a large building.

Practice standing in the place and closing your eyes, trying to reconstruct the place in your mind. Observe the background and observe what a person could do in the place — where he could walk to, where he could sit down, where he might go upstairs, where he would pay if it is a store. As you come to blind spots, open your eyes and make further observation. This will teach you the things you need for drawing. Remember that this is a gesture study and that you are, therefore, to seek for the movement of the whole. See the whole thing as a unit. Just as, in the group poses, you drew the gesture of two or three figures together, not as separate units, here you draw the gesture of the figure or figures together with the place that surrounds them, thinking of the place, figures, and objects as one whole thing.

This exercise is to be considered as ‘homework.’ It is not included in the schedule proper because you are expected to practice it every day even though you may go to class only once or twice a week. Since you never use the model for it, you may conveniently practice it during any spare quarter of an hour in your day. However, if you have no other time, or if you have forgotten to do it, devote some time from your regular lesson to the daily composition.

No other exercise in the book is more important than this one. These compositions do not have to be right. They can be all wrong. The important thing is to do them — three hundred and sixty-five of them between today and this date next year. It will be helpful if you keep this up for a year, and it will be twice as helpful if you keep it up for two years. The really serious student will make a quick composition every day for the rest of his life despite everything else he has to do. Start with tbe scribbled gesture technique and go on from that to develop your own ways of working. The drawings on the following pages will show you some of the ways in which different artists have used the quick composition as a means of study.

Draw for twelve hours as directed in Schedule 5 B-E.

Selected Pictures to this Section 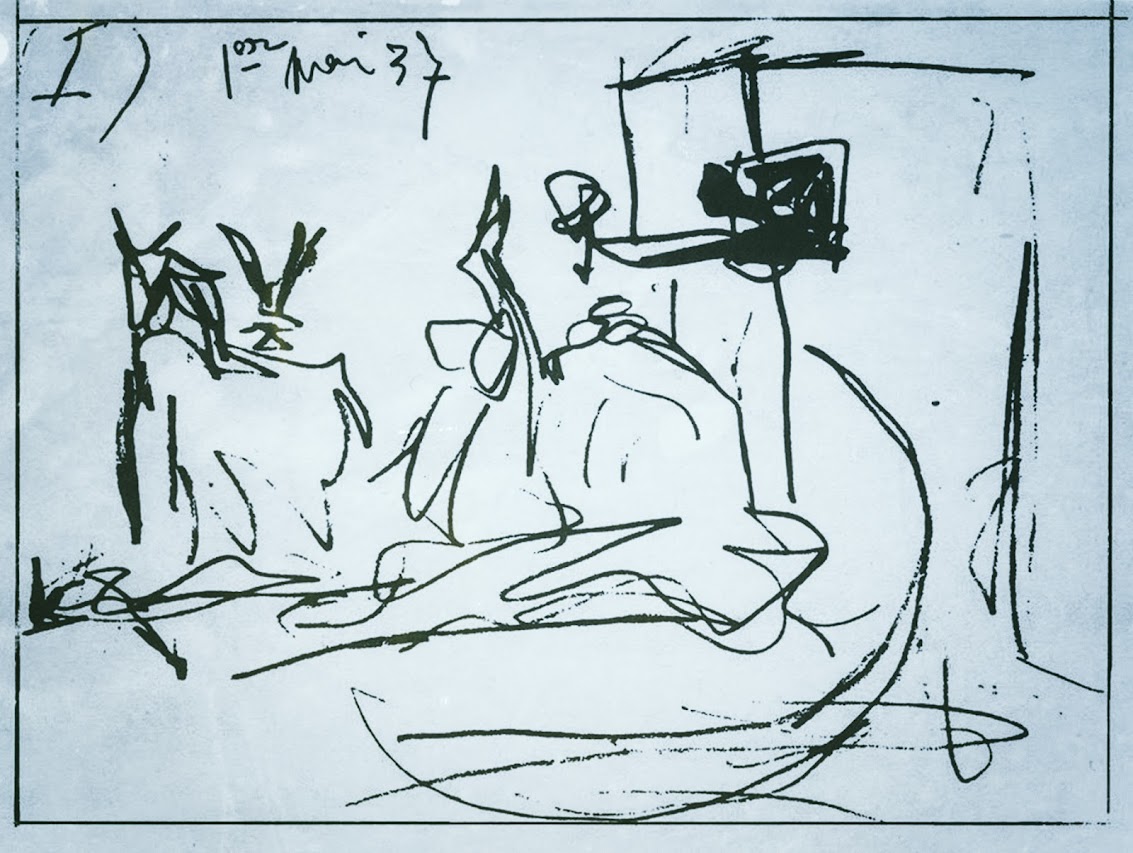 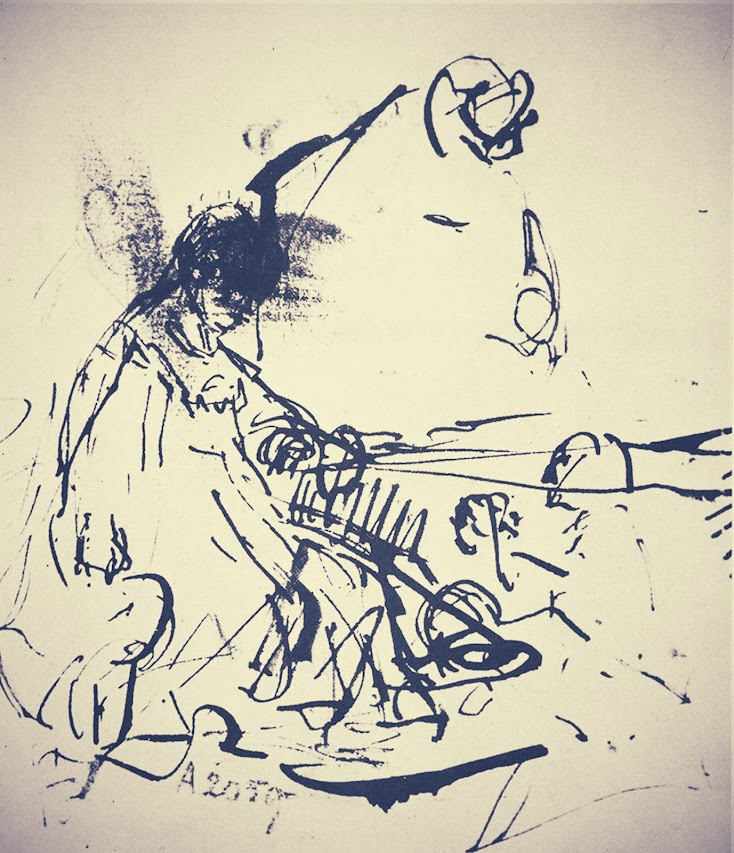 Haman Implores the Grace of Esther by Rembrandt 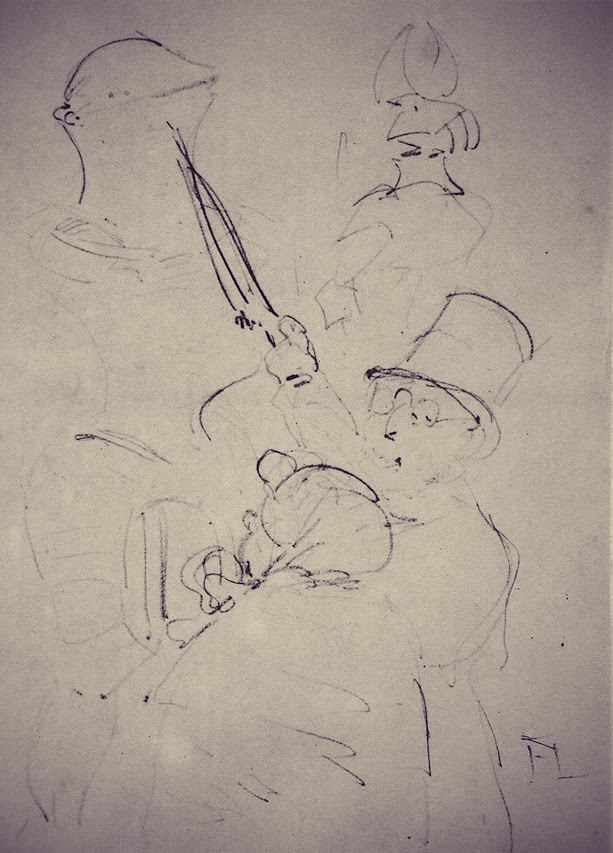 Courtesy of the Fogg Museum
In the Museum by Toulouse-Lautrec 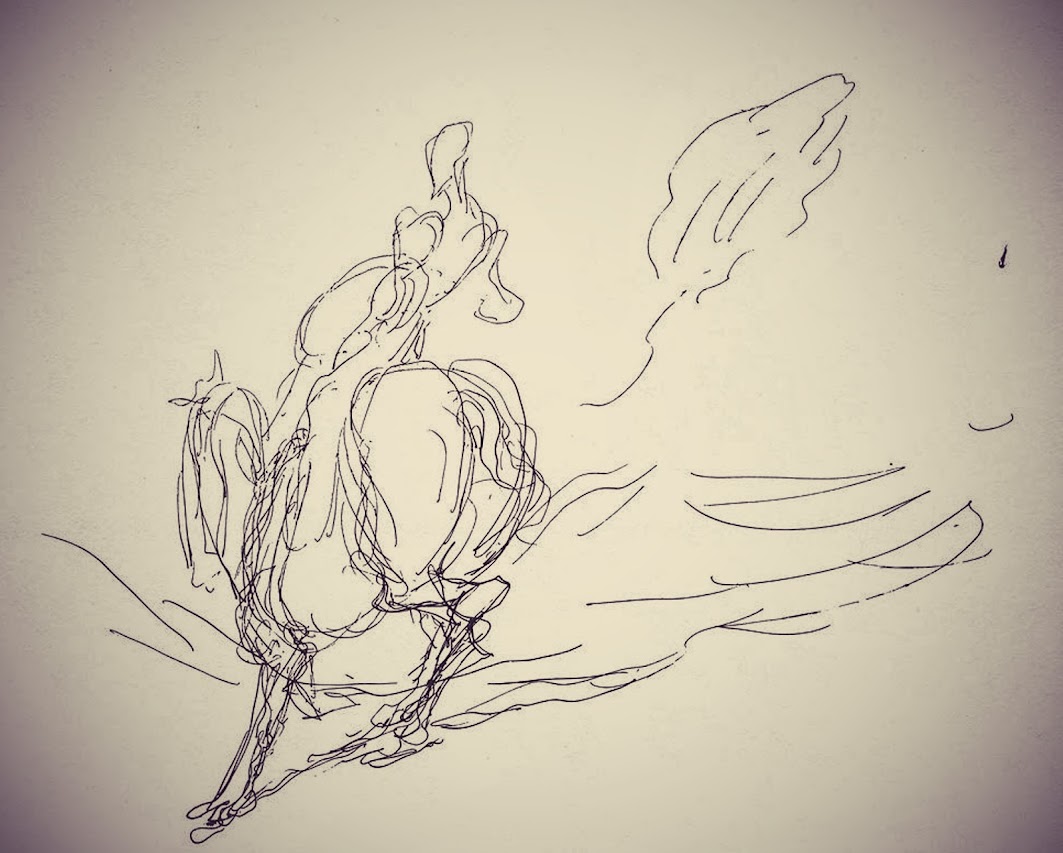 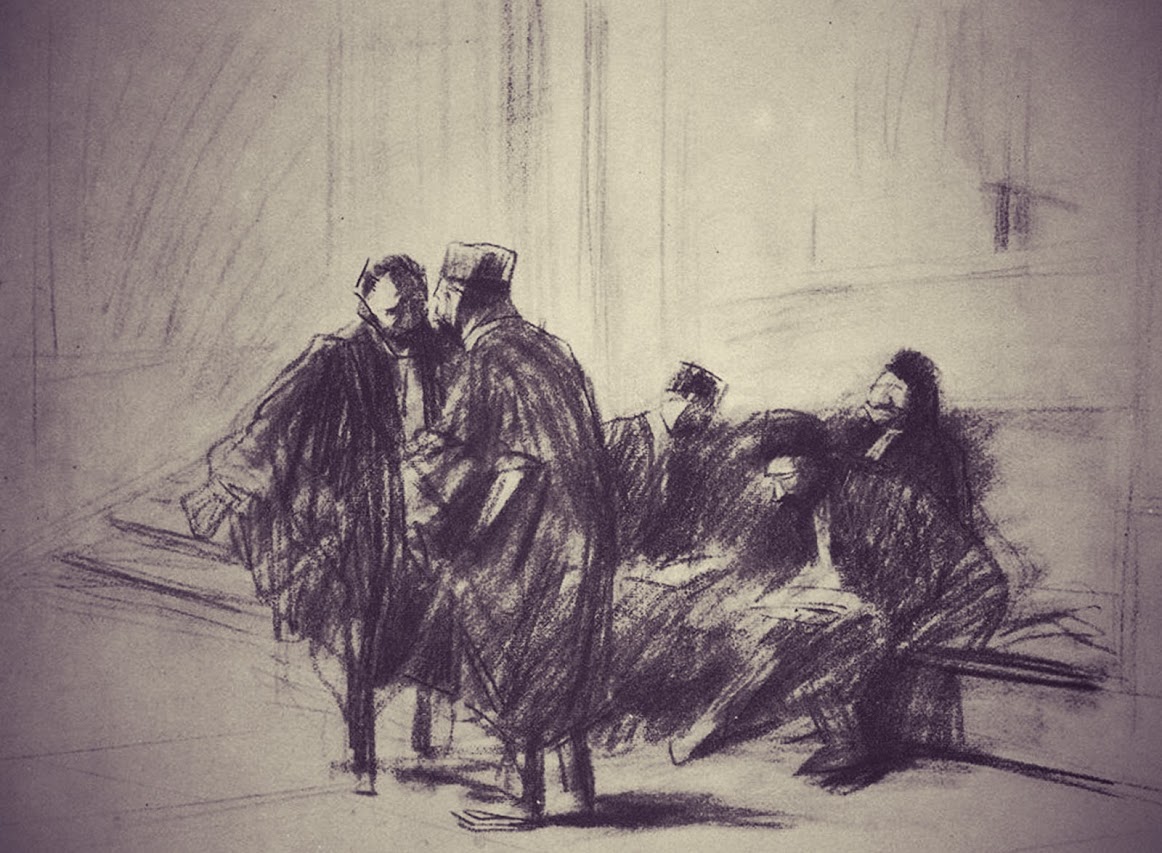 Collection of Mrs. Diego Suarez
Photograph by courtesy of the Frick Art Reference Library
Lawyers in the Lobby by Forain 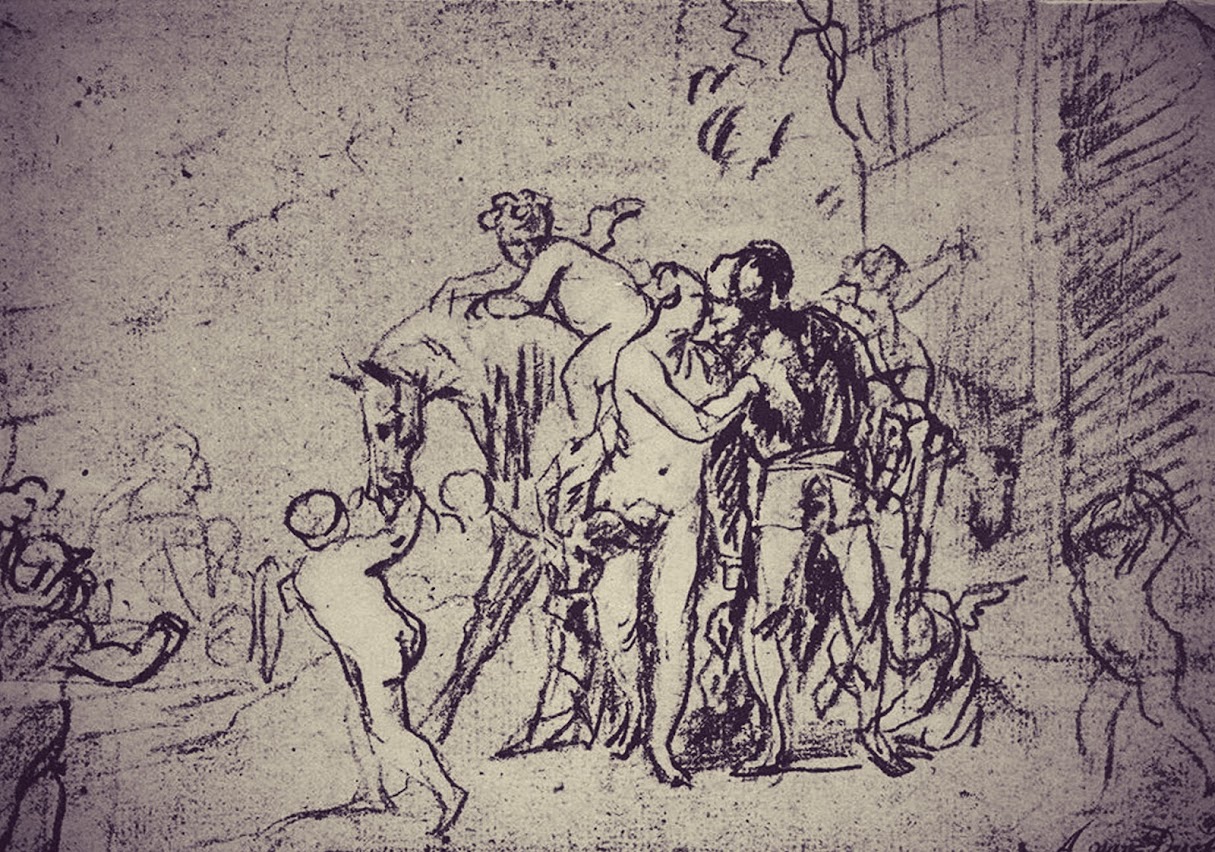 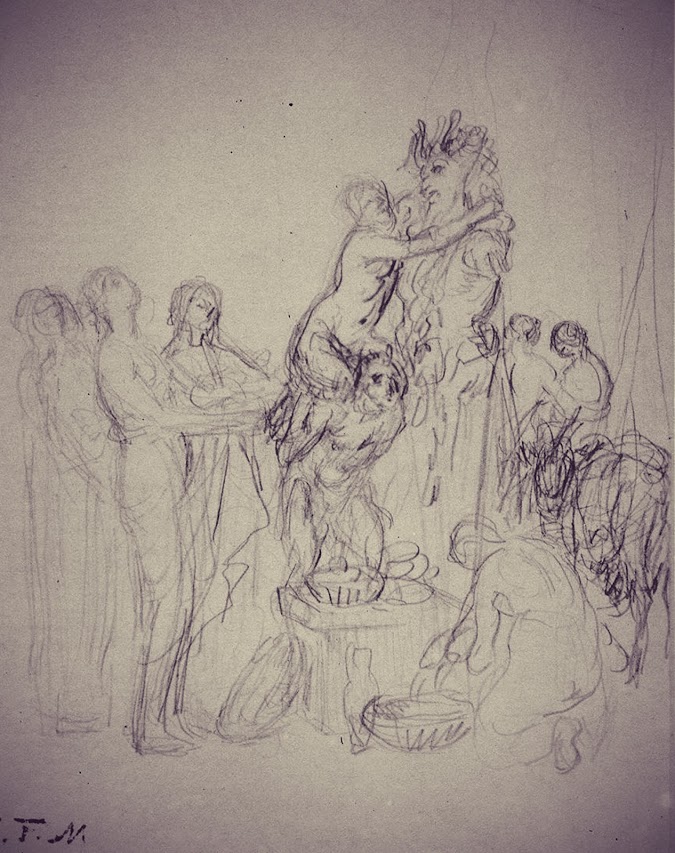 Courtesy of the Fogg Museum
Offering to Pan by Millet 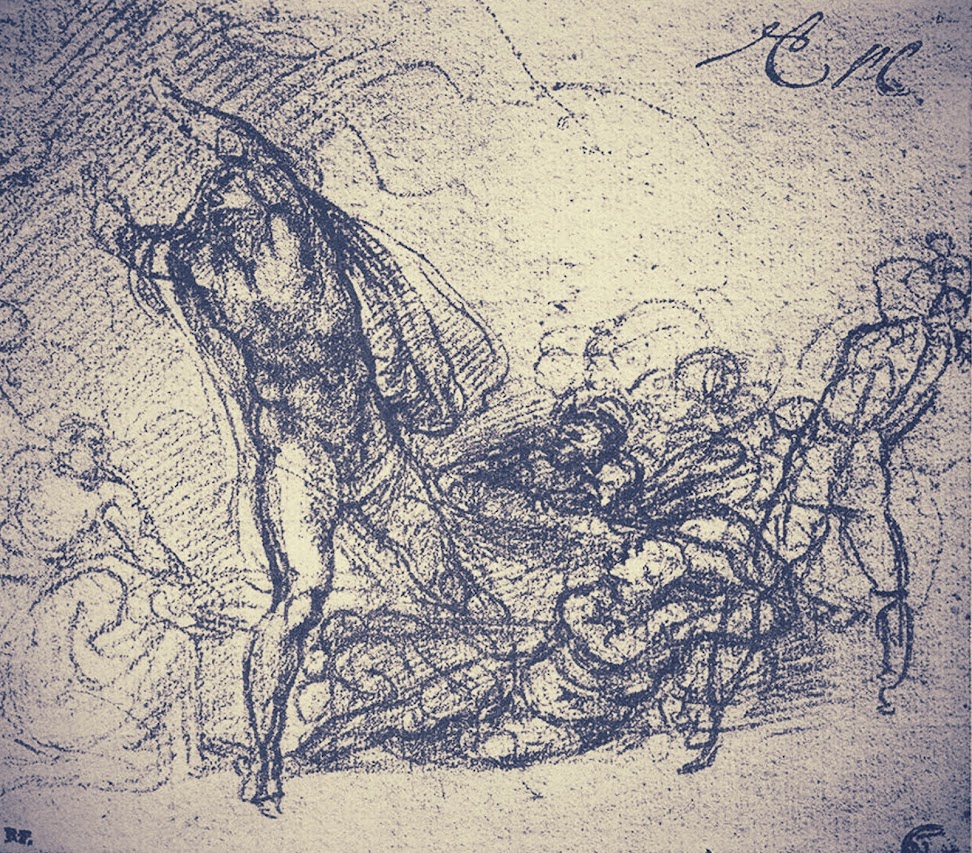 Louvre, Paris
Christ Rising from the Tomb by Michelangelo 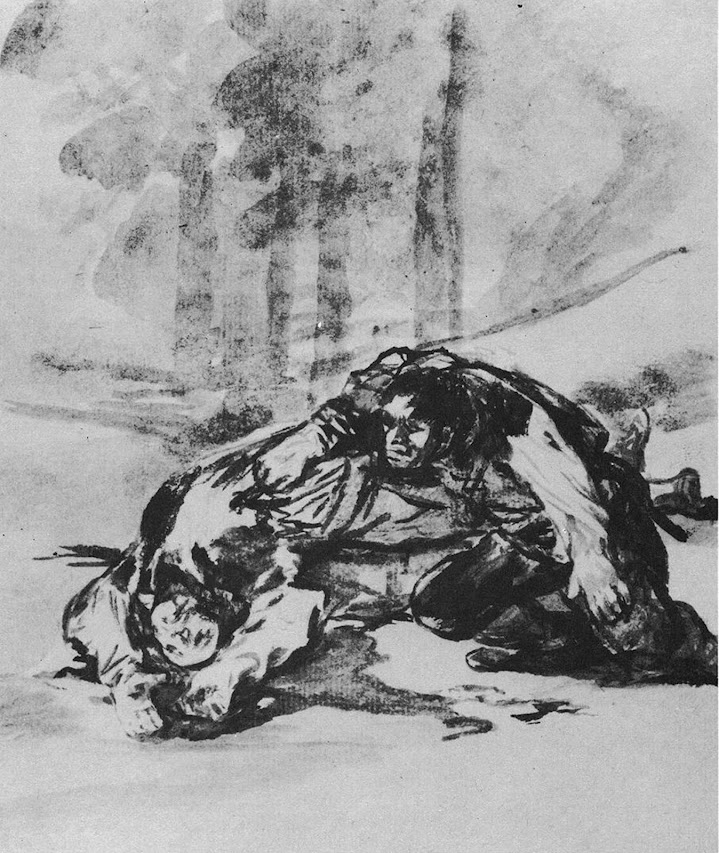 Courtesy of the Metropolitan Museum of Art
The Stabbing by Goya 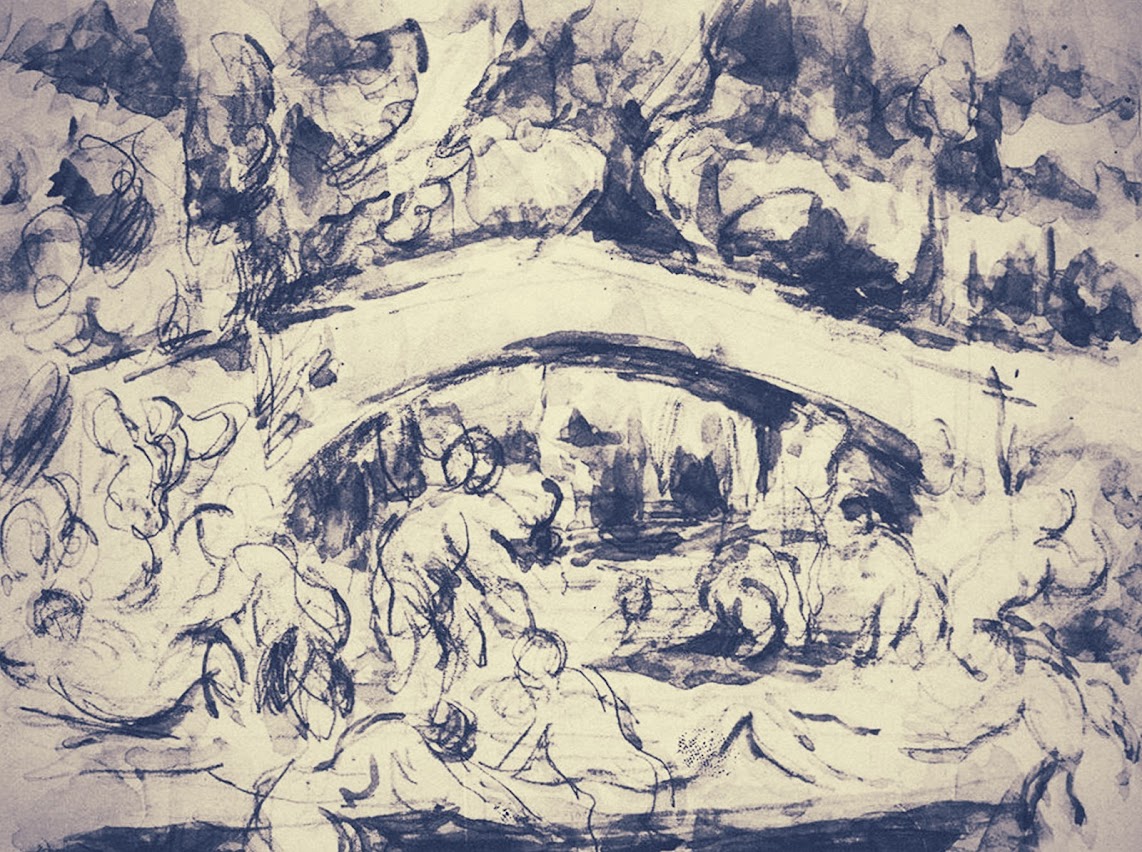 Courtesy of the Museum of Modem Art: Lillie P. Bliss Collection
Bathers under a Bridge by Cezanne 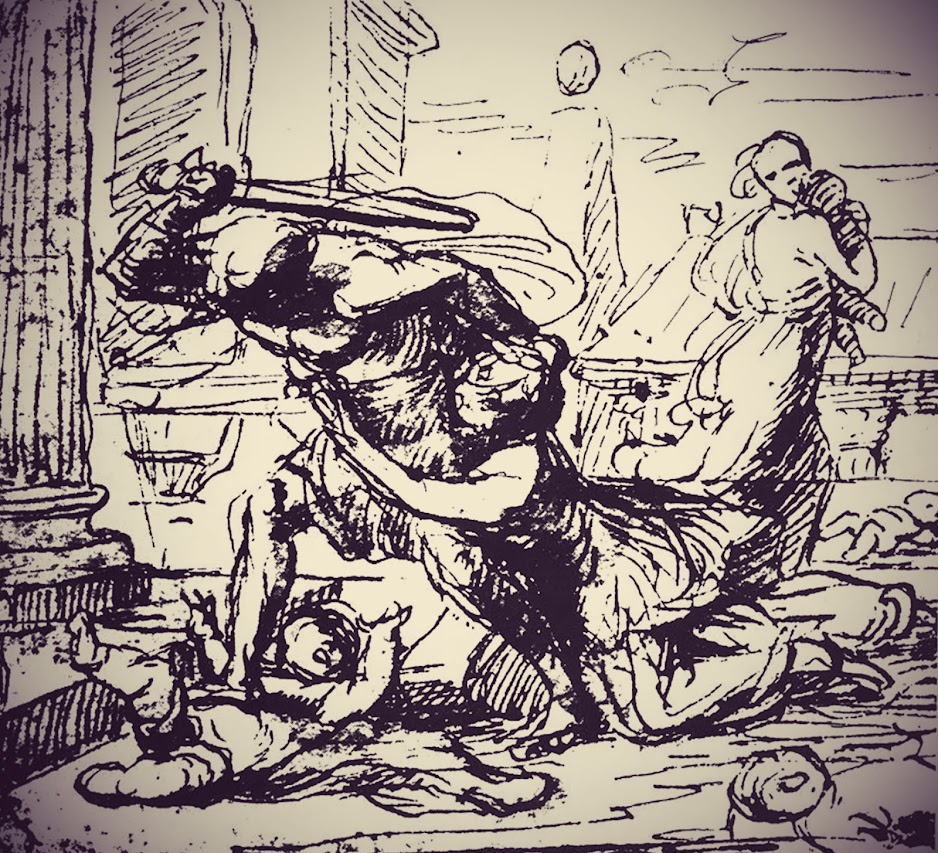 Lille Museum, Collection Wicar
Massacre of the Innocents by Poussin 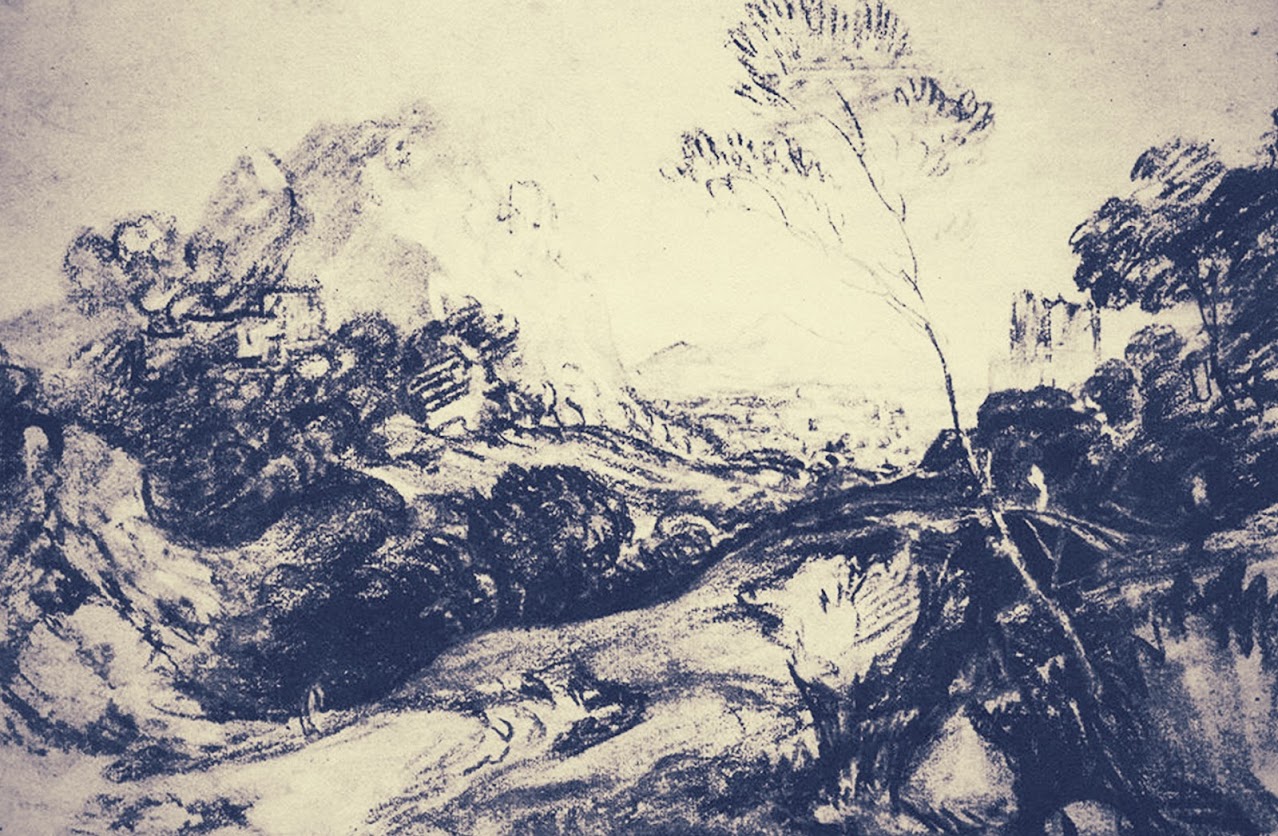 Courtesy of the Metropolitan Museum of Art
Landscape by Gainsborough 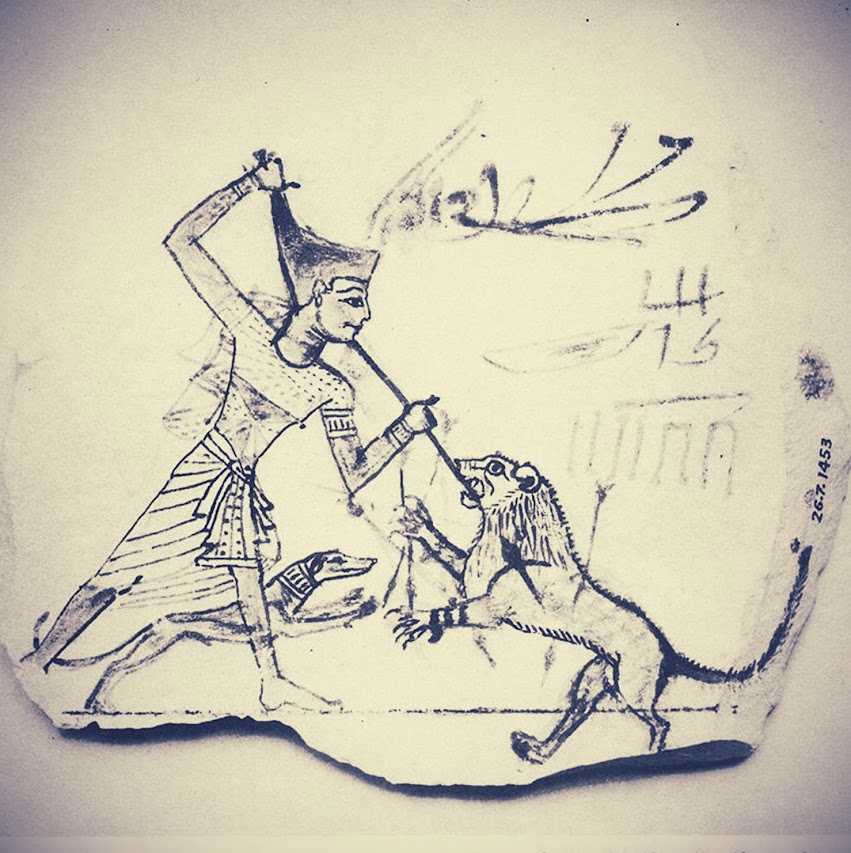