With the exception of the contour study, there is no drawing that is not a memory drawing because, no matter how slight the interval is from the time you look at the model until you look at your drawing or painting, you are memorizing what you have just seen. Of course, in that kind of drawing in which the student looks back and forth from the model continuously, he is memorizing little bits at a time, hoping to be able, after he has assembled all the little bits, to put them together by some preconceived theory or plan or by some belated effort to see the model as a whole. Actually, the best plan is to see the figure as a whole in the beginning and in the course of my teaching I have devised many exercises toward that end. The first and simplest of these, as I have already explained, is the quick gesture study. The second, memory drawing, is a variation of that exercise. Because you do not draw while the model is posing, you are less apt to look at specific details and you are able to fight with even greater concentration for a study of gesture, which is the thing that gives unity to the various parts.

* Five groups of three drawings each. ** Five drawings from imagination and five from the actual pose.

The model is asked to take three poses successively, holding each for about half a minute, and then to step down from the stand so that he cannot be seen. During the next minute, make gesture drawings (Exercise 2) of the three poses in any order that occurs to you. Even if the poses are not clear in your mind, put something down and keep drawing for a minute. After you have finished, the model does not repeat the poses but goes on to three new ones. Make no attempt to draw while the model is posing. Sit with your arms folded and your pencil in your pocket so that you will not even ‘draw’ with a movement of your hand. You are not trying to remember merely the position of the model — just as, when you memorize a poem, you are not trying to remember the shape of the letters on the page. You should feel the whole movement with your whole body, not merely with your hand. At first you may find yourself, like many other students, staring blankly at an equally blank paper. Draw something. Make some kind of lines whether you have any memory of the poses or not. Then try again. Soon you will find yourself remembering the gesture of at least one pose. A little later you will remember two and then three. The poses need not be related, and it is not wise to enforce any system of memorizing them, because you will then be making the intellect reach out too far ahead of the very senses that this exercise is intended to train. You do not want an intellectual transposition of the gesture. Remember with your own muscles the movement. As soon as you find that you can remember three poses fairly well, enlarge the group to four, and finally to as many as you can remember. Some of my classes have been able by the end of a year to enlarge the group of poses to ten. This may be impossible if you try to remember with your conscious mind, but it can be done if you are able to make use of a purely physical sensation. In this respect memory drawing is a little like the ‘touch method ’ of writing on the typewriter; if you try consciously to think where the letters are you are likely to become confused, but if you rely on your sense of touch you can become very accurate. 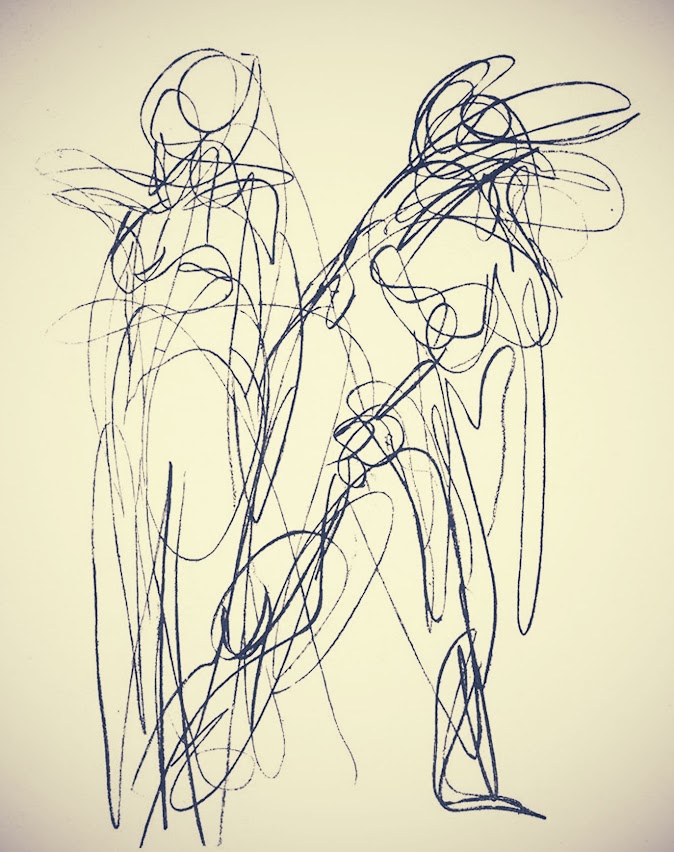 You can practice memory drawing from any group of quick poses. Simply watch as many of them as you think you can remember, then turn your back on the model and draw. Any of the subjects you use for gesture studies will serve equally well for memory studies — in fact, any subject will serve.

Draw for three hours as directed in Schedule 4 A.

The model is asked to take a moving pose. This needs an example: The model stands facing the class and turns, keeping his right leg in the same position but swinging his left leg around, twisting his torso and reaching with his left hand to the right; then he returns to the original position. He repeats this over and over again for three minutes, sometimes moving slowly, sometimes moving naturally. Starting with that part of the body which remains more or less stationary, make a gesture drawing of at least two poses, one at the beginning and another at the extreme of the action. In the pose described above, the right leg remained more or less stationary and the extreme of the pose occurred when the left hand was reaching to the right. These two drawings are made on the same paper and are superimposed, the part of the body that was the same in both poses being drawn only once. Keep the pencil continually moving as the model moves. Later you may use the moving-action pose to make drawings that are more detailed, but for the present stick to the spirit and the style of a quick gesture study. Try to draw three positions whenever the pose permits. 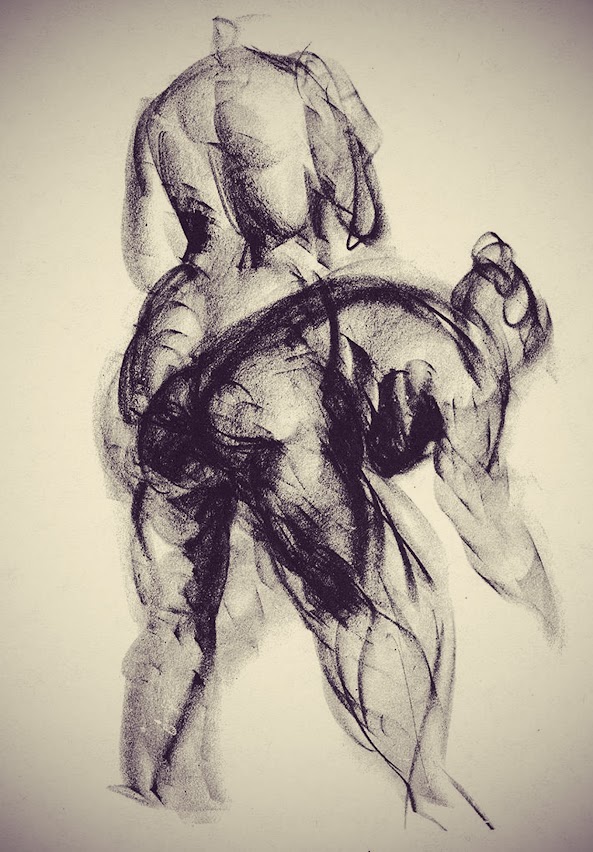 To facilitate the model’s work, suggest that he think of any natural action that allows some part of his body to remain in the same position. For example: (1) A man recognizes an acquaintance who has just passed him and half turns, waving his hand. (2) A man seated rises to reach for a pen he has dropped on the floor, keeping one hand on the back of his chair. Also practice this exercise from everyday life, drawing any action which you can see repeated — a boy pitching a baseball, a man chopping wood, a woman taking clothes from a basket and hanging them on a line. 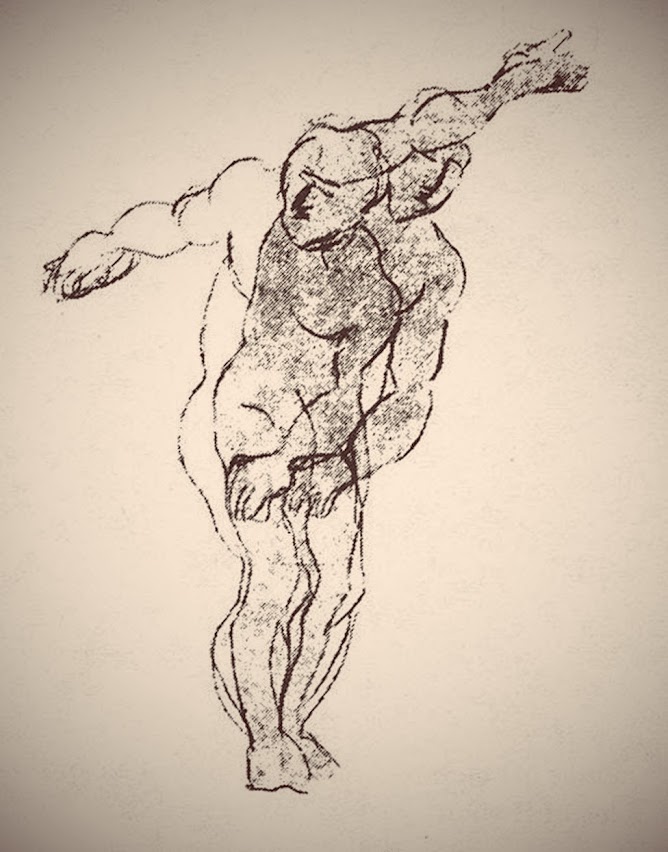 Draw for three hours as directed in Schedule 4 B.

Describe a pose which the model is to take. Then make a one-minute gesture study as well as you can from this verbal description, the model remaining in the meantime out of sight. After you have finished, ask the model to take the pose that has been described and make a two-minute gesture drawing of the actual pose on a fresh piece of paper. The whole process — the description and the two drawings — will take about five minutes. The description of the pose may be given by each member of the class in turn (by either you or the model if you are working alone). The effort to describe the poses is good training in itself. It will naturally make you more observing and more conscious of what the human body can do, and you will begin to note the variety in the ordinary postures of people. The descriptions should not be too elaborate or detailed. Describe the gesture in general terms, specifying only the direction in which the model is to face. You may say, for example, ‘The model will be seated facing the class. He hears a door opened behind him and turns to see who it is.’ The details of the pose are left to the model and it doesn’t matter whether your idea of it coincides with his or not.

Draw for three hours as directed in Schedule 4 C.

During a three-minute pose make a gesture drawing of that pose as it would look in reverse. For example, if you see a side view of the model kneeling on his left knee, his right arm extended in front of him and his left arm back of him, draw as if he were facing in the opposite direction, kneeling on his right knee with his left arm forward and his right arm back. Whatever the pose, draw as if the model were facing the opposite way and were using the opposite limbs for the gesture. What you draw will resemble the reflection of the pose that would appear in a mirror held in front of your eyes. The model then takes this reverse pose and you draw it again on a fresh sheet of paper. Draw ‘ in reverse ’ a great variety of things, such as a piece of furniture, a house, a pitcher, an automobile.

Draw for three hours as directed in Schedule 4 D.

Two or three members of the class, or two models, are asked to pose together for two minutes, using some natural gesture in which the figures are connected, such as the following: two people shaking hands; one person looking over the shoulder of another; a girl looking at another girl’s necklace; a clerk fitting shoes or a hat; a doctor looking down a patient’s throat; a boxing match; a barber at work. Subjects like these may be drawn also from everyday life. The purpose of this exercise is to treat the two or three figures as a unit. Do not draw one figure and then the other, but follow the gesture of the whole, using the scribble technique.

Draw for three hours as directed in Schedule 4 E.

After the class or group have worked together long enough to become acclimated to the serious purpose of their study, the students may sometimes take the poses for all these quick studies. This gives the students who are drawing a greater variety and it gives the student who is posing a better appreciation of the emotional impulse necessary to make the pose expressively natural. 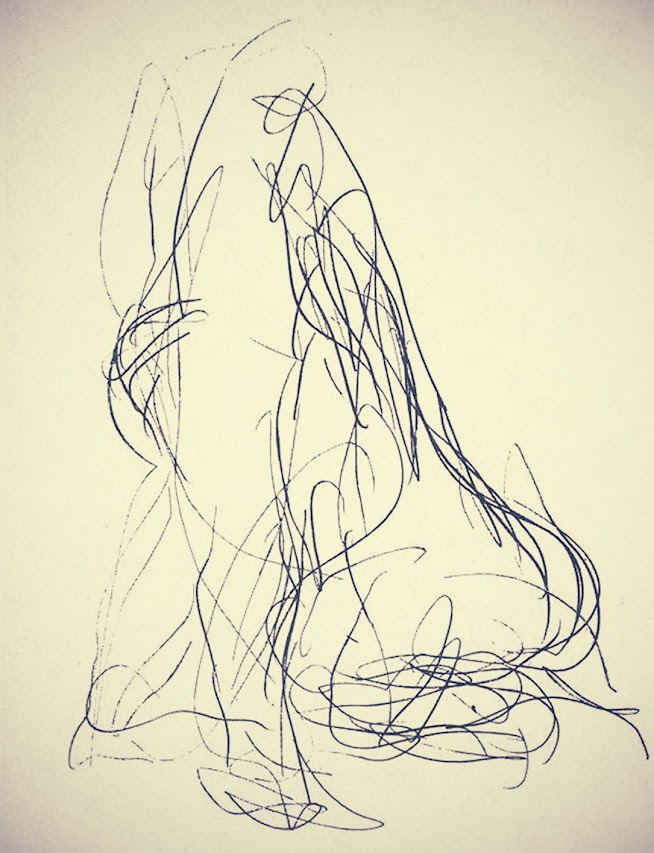 When you are working alone try posing for yourself. Take a pose for a minute or two. Don’t try to visualize it. Try to get the sense of the gesture, the essence of it. Think of it all as a unit, as you think of a spoken word as being a whole and not so many letters. Think how a certain part of the body pushes forward, how weight presses in a certain place. Then make a gesture drawing of your own pose.

As soon as you are able to draw somewhat readily from memory, combine the principle of memory drawing with the other quick studies I have described — moving action, descriptive, reverse, and group poses. Watch without drawing while the model takes the pose. Draw only after the model has left the stand. 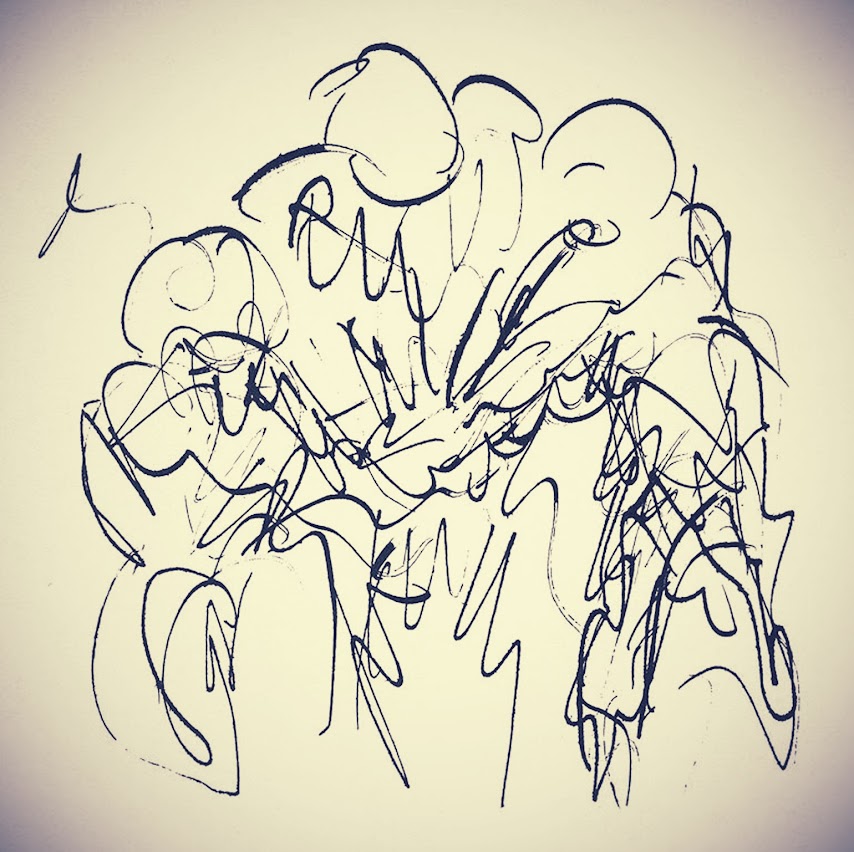