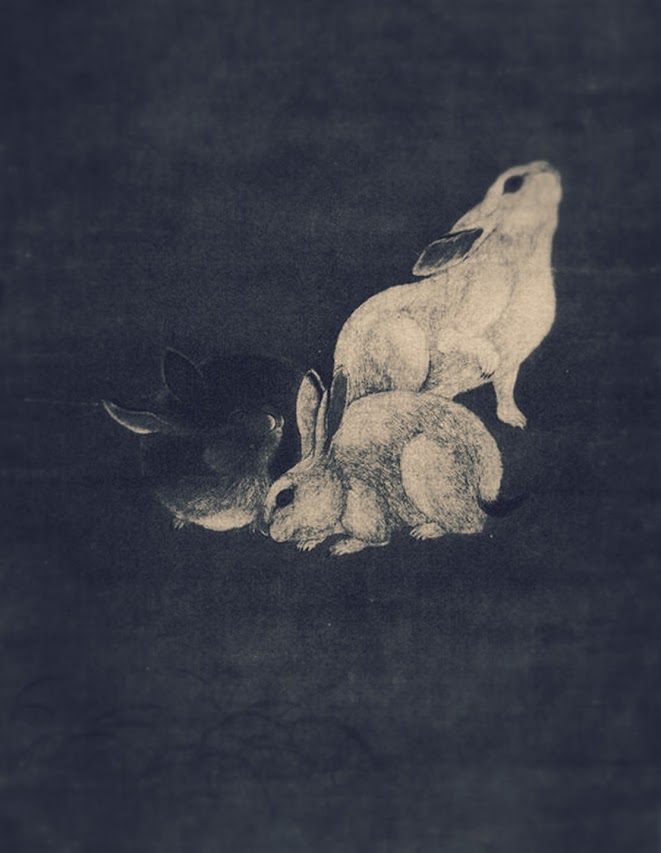 Courtesy of the Metropolitan Museum of Art
Chinese Water-Color Painting: Three Rabbits, attributed to Kung Chi
In order to get the same feeling with the brush that you had with the pen or crayon, keep the brush dry

Perhaps you feel that the modelled drawing in water color is the most difficult of the exercises you have taken up thus far and that your grasp of it is the least satisfactory. If you have never used water color before, you may feel that the color runs away from you, that the brush is hard to manage, and that your paper shows only a series of meaningless blobs. In that case, provided your effort is sincere, all you need is more practice. On the other hand, if you have used water color, you may have acquired some technique that hampers you in trying to record the simple sensation of weight and of touching the form. Most water-color techniques — in fact, considerations of technique — have a tendency to attract your attention to the surface, to superficial qualities, and away from the core which you are meant to comprehend. You must make a tremendous effort to overcome that tendency. If you failed to do so, it would be better to skip this exercise altogether and continue with crayon or ink. 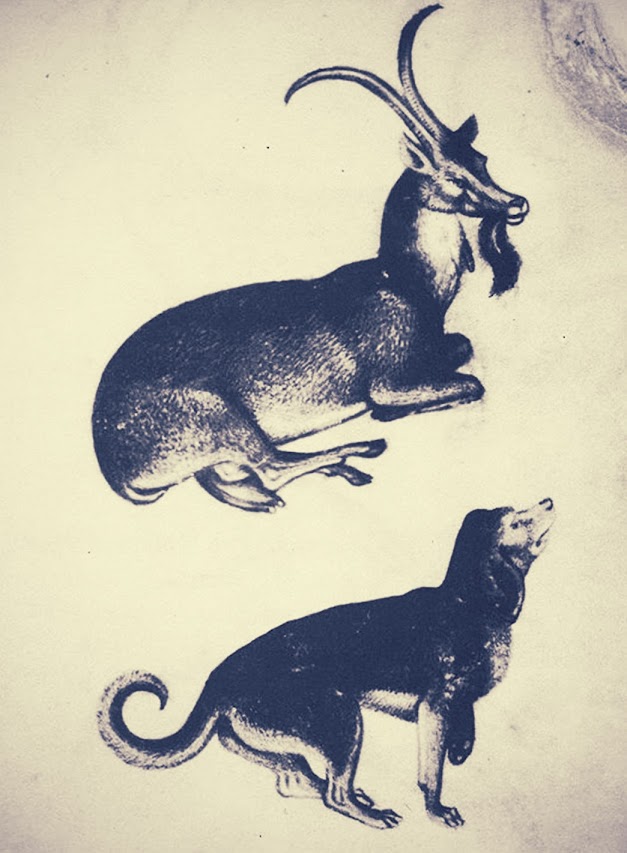 Remember that you are not trying to paint with water color. You are only trying to draw. In order to get the same feeling with the brush that you had with the pen or crayon, it is necessary to keep the brush dry. In the very beginning the brush may be quite wet, though the color should be thick and not watery, but from that point onward keep it dry. To understand how to do this, make an experiment. Take a perfectly dry brush, one that has not been in the water at all, and dip it into the paint just as the paint comes from the tube. Make several marks on your paper. You will see that the paint does not spread but stays where you put it. This is, of course, a little too dry because the paint probably stands up on the paper and the hairs of the brush spread, but it will give you an idea of how dryness enables you to control the paint.

Make a mixture of burnt sienna and black with a very little water in your water-color pan. Wash your brush and wipe it quite dry on the paint rag. Then dip the brush into the mixture and you will find again that you can control the brush better because there is no excess water in it. By working in this way you should be able to handle the brush just as easily as a crayon. When you continue the same water-color drawing on a second day, first take a clean damp brush (not too wet) and lighten the parts of the figure that are nearest to you by working the brush into the paint. (Keep cleaning the brush as you do this; otherwise, the paint you take off goes on again.) This will have two good effects. It will dampen the drawing, which had gotten completely dry, so that it will take the paint more easily, and it will keep the drawing from getting so dark that you cannot continue to model. In other words, just as you use the dark color to push back the forms that go back, you can use this washing out or lightening of the color to pull toward you the forms which are nearer you.

Since the manila paper will stand a great deal of washing and many layers of paint, you can continue working in this way almost indefinitely — or until you feel that you have actually reconstructed the entire figure with all its details. This control of the brush will not come all at once, but it will come. In Schedule 10 I have asked you to devote two hours each to two modelled drawings. If you find that you cannot yet continue satisfactorily with one drawing for two hours, do not let that worry you. Simply make one-hour studies using different views of the pose or different parts of the figure. If you feel that you are beginning to make progress with this exercise, keep it up for a longer time than I have specified. It will be very helpful if you repeat Schedule 10 once or even twice, devoting as much time as you can (up to four hours) to one modelled drawing. If you are drawing landscapes, I suggest that you add two or three colors at this point, permanent blue, lemon yellow, and viridian green or Hooker’s green. This will give you a closer approximation of the color, but you are still not to think of trying to reproduce exactly any color that you see. Begin by building up the whole thing with one color (yellow ochre) and then modelling with a darker color. Modify the blue by mixing black with it.

Think of the earth as something that has endured for thousands of years while the grass has sprung up from it and lasts only for a season. The hills have been pushed up by strong geological forces while the gullies have been washed out by rain. Think how long it would take to walk from where you stand to the horizon and what an eventful journey that would be. Think of all the things that man can do or has done to the expanse of earth you see. Permit yourself to become receptive to the temper imposed on it by sun, wind, cloud, distance, heat, storm.

Draw for three hours as directed in Schedule 10 A.

This is really a first lesson in anatomy, but it is a very simple one. I will start by giving in the simplest terms possible the normal proportions of the human figure. No one of these measures is exact, or could be exact, for no two figures have the same proportions. Nor is this planned to be an ideal figure but only a starting point for further study. The diagrams which illustrate these measurements are not drawings just as a map is not the trip. Your drawings are to be continuously meaningful to the actuality of the figure. 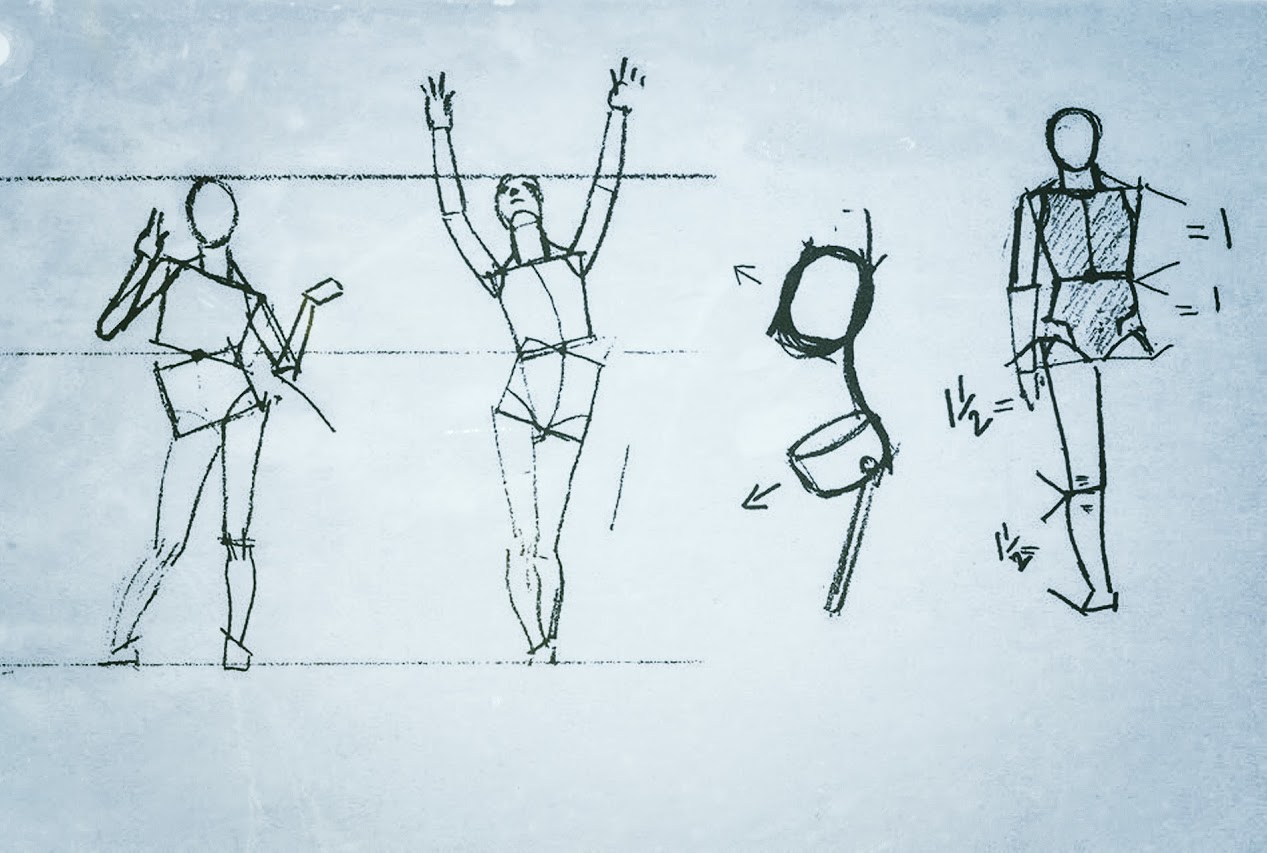 The torso is divided into two equal parts, shoulders to waist and waist to thigh, and we use a half-section of the torso as the unit of measure. From the shoulders to the waist then we count as one. From the waist to the thigh is also one. From the collarbone to the top of the head is approximately one or somewhat less. From the highest point of the leg to the middle of the knee is one and one-half. From the middle of the knee through the foot, if it is placed flat on the floor, is also one and one-half. The highest point of the leg on the outside is less than half of the way up into the lower part of the torso. The width of the shoulders equals one and the neck occupies a third of the distance across the top of the shoulders. The arms fit into the torso at the shoulders just as sleeves are set into a coat.

From the shoulder to the elbow is one and from the elbow to the wrist is one. The head is longer in the front than it is at the back so it sits on the neck at an angle, and the neck seems to be set down farther in the front than it is in the back. The upper part of the torso is supported by the basket of the ribs and the lower section by the pelvic bone, and the spine holds these two sections together in the back. In the front they are held together by the large perpendicular muscle of the abdomen. From the side the two sections of the torso have the same proportions as from the front, but because the spine has a slight curve they appear to be joined together in the back and somewhat separated in the front. When the body bends, either forward or back, the torso seems to fall in or expand, rather like an accordion. 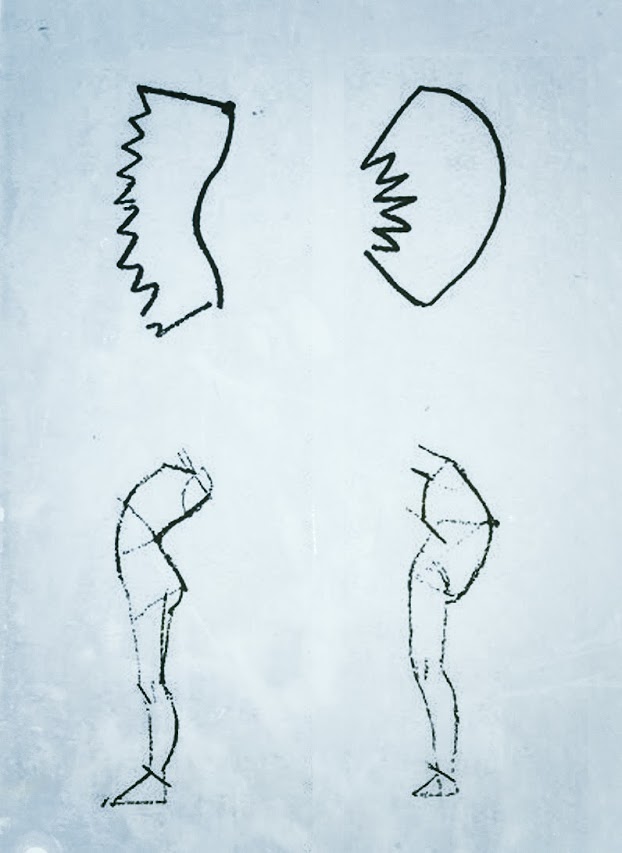 From the back the proportions are naturally the same because the silhouette is exactly the same. (The front view and the back view of any object must be the same in silhouette.) The back of the figure, however, looks different from the front. It is a good deal flatter and a difference in muscular construction makes the torso seem longer and the legs shorter. .In the front the muscles of the chest do not overlap the arms as the muscles of the back do. But the bone construction, front, side, and back, is necessarily one thing, and it is the bone construction which causes the proportions.

Draw for six hours as directed in Schedule 10 B and 10 C.

I never concern myself with how much talent my students have. I couldn’t say to anyone in the beginning, ‘You have no talent.’ I believe that nature is lavish with talent just as it is with acorns — but not all acorns become oaks. Talent is something that develops, or appears, as you work. The fact that you gravitate toward an art school — the very fact that you have opened this book — indicates that you have at least a hankering for art. What is required is the necessary effort.

Most of us are so constructed that we try to take care of ourselves and save ourselves effort. But when you are too careful and save yourself too much, you cease to be creative because there cannot be creation without a terrific amount of energy. Energy is like the heat which is required to weld things together, for creation is a welding of things that have not previously been united — making them fit together as a unit, making of them a new thing, a fresh thing.

Draw for three hours as directed in Schedule 10 D.

If you really want to learn to draw, you must be willing to build the underpinning. I have had students whose imagination far exceeded what might be called their student qualities, their capacity for sustained and detailed study. They want to run before they can walk. Unless they can discover the other qualities they need to balance this errant imagination, they often give up drawing and try some other art. If you are a student of this type, you may find some of these exercises burdensome. That will not matter, so long as you do them. No art is all made up of one thing. There are many ingredients, of which imagination is an important one but not the only one, and the ingredients must be balanced. I have had other students who seemed to be more interested in ‘being artists’ than in drawing. They were enthralled by a train of mental ideas rather than by the feeling of responding on paper to a vivid experience of the senses. Such students are likely to be found, not sitting in front of the model, but sitting over a cup of coffee in a neighboring cafe, talking about art. The student who really learns to draw will be the one who draws. As Leonardo said, the supreme misfortune is when theory outstrips performance.

Draw for three hours as directed in Schedule 10 E.