How to Draw the Head from Any Angle

To draw the head from any angle you must first understand its basic structure. Look past all the distracting details and visualize the underlying forms. This ability to simplify can be applied to the features of the face, but when starting the drawing you could look even further. Ignore even the features and simplify to the most basic form of the head. I use a method taught by Andrew Loomis in his book, “Drawing the Head & Hands”.

The head deconstructed into its basic forms, is a sphere as the cranium and a block as the jaw and cheek bones.

A Sphere as the Cranium

The sides of the head are flat, so we can slice off a piece from both sides of the ball. From profile, this plane will be a perfect circle, but when drawing it from any other angle, it will appear to be an oval because of perspective. Divide this oval into quadrants. The vertical line represents the beginning of the jaw. The horizontal line represents the brow line. The top and bottom of the oval help you find the hair line and the bottom of the nose.

A Block as the Jaw and the Cheek Bones

Constrution From any angle

Step 1 – Determine the Angle of the Ball

The angle of the head is established at the very beginning of the drawing with the ball. All three axes must be addressed:

X Axis – The up and down tilt is established by the angles of the horizontal and vertical lines in the oval. Also, on extreme up tilts and down tilts, the thirds will be foreshortened because of perspective. 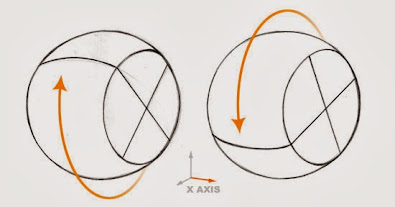 Y Axis – The direction the head is turning (left or right) is established by the width of the oval. As the head turns towards you, you can see more of the front of the face and less of the side, so the oval representing the side will get narrower. Similarly, when the head turns away from you, more of the side plane is revealed and the oval will appear wider.

After establishing the angle of the ball, divide the face into thirds. The distance between the hairline and brow-line should be the same as the distance between the brow-line and bottom of the nose. Add that same distance to find the chin. Notice how the  hairline and nose-line align with the top and bottom bottom of the oval when wrapped around the face. Imagine the head as a box. The thirds must be wrapped around the side plane and front plane.

A common mistake at this point is to make the jaw too long in comparison to the ball. Make sure to measure your thirds correctly and that they relate correctly to the ball. Notice how the shape of the jaw changes from various angles.

With this basic structure properly established, it becomes much easier to add the features in the right place.

Video How to Draw the Head

VIDEO 1 How to Draw the Head from any Angle

VIDEO 2 How to Draw the Head – Front Wiew

VIDEO 3 How to Draw the Head – Side Wiew

VIDEO 4 How to Draw the Head – Extreme Angels