Please have a look at the Sitemap where you will find more nice resources about drawing.

Drawing babies is almost a branch of art in itself. Yet the illustrator and commercial artist may be called upon quite often to include them in his work. Babies also make particularly attractive pictures for framing; when they are well done, most families are delighted with them.

If the baby head is understood, it is really no harder to draw than any other head, and sometimes not as hard. The reason is that the artist is dealing much more with construction and proportion than with anatomy. The skull is important, as always, but the muscles are so deeply hidden that they hardly afreet the surface. As Plates 51 and 52 show, the proportions are somewhat different from those in the adult head.

In the baby head the bone structure is not yet completely developed. The jawbone, cheekbones. and the bridge of the nose are relatively much smaller. This makes the baby face smaller in proportion to the skull, so that the face, from the brows down, only occupies about one-quarter of the whole area of the head. The cartilages of the nose are way ahead of the bone structure, so the little nose usually turns up, because the bridge above it is rounded and close to the plane of the face. The upper lip is longer, and the chin, being undeveloped, usually recedes or is well under the lips.

Only the iris of the eye is fully developed, which makes the eyes appear large and buttony. They appear to be farther apart than the average adult’s eyes because they rest in a smaller head. Eyes set too close together are unpleasant in a baby face and can spoil a drawing. A baby’s head can best be studied when the baby is sleeping. Otherwise we must turn to photographs or magazine illustrations. Babies are bound to wriggle and there is nothing that we can do about it. It is therefore of great importance to fix the general or average proportions in your memory. You will find that a certain blockiness of planes and edges also helps to put vitality into a drawing of a baby. Babies’ faces are so smooth and so round that if we copy that quality too meticulously the final effect may lack character.

If you arc disturbed by seeing edges of planes in a drawing of a baby face it is probably because you are too close to your drawing. Step back before you change it. Maude Tousey Fangel, one of the greatest baby artists, draws quite vigorously in angles and planes. Mary Cassatt, the Impressionist painter and student of Degas, also had this quality in her work.

Plate 53 shows that the general shape of the baby’s head is a bulge attached to a round ball. The distances up and down between the features are relatively short, and the face seems quite wide. The first build-up of the basic shape should have that cute baby look.

In the sketches in Plate 54, the eyes rest in the lower half of the first quarter division. The top line is the line of the brows; the nose rests on the line of the second division; the corners of the lips on the third; and the chin drops slightly below the line of the fourth division.

Plate 58 shows the four divisions for children three to four years old. Note that the brows are a little above the top line, and the nose, eyes, and mouth have been raised above the division lines. These changes make the baby look slightly older. Actually, we have allowed a little more chin and thereby lengthened the face slightly. Plates 55, 56, and 57 show a number of baby heads, all drawn with the foregoing proportions, but differing a little in character as a result of slight differences in the placement of features and the relationship of the face to the skull. Though the proportions vary only slightly, babies’ skulls may differ considerably in shape. We find high, low, or elongated skulls in babies as well as in adults.

Changes in the infant skull take place very rapidly from the moment of birth through the first year or two. It is in the infant stage that the skull takes shape. The original shape may be due to prenatal pressures and the degree of hardness of the bone. After birth the bone tends to adjust to the conditions imposed upon it, the growth of the brain, the closing of the sections of the skull at the top of the cranium, which nature left open and pliable to facilitate birth. Racial skull types are inherited, but the individual type can be purely a matter of circumstance.

In the baby the cranium is much larger in proportion to the face than it is in the adult. The face to the brows occupies about one-fourth of the whole head. This sets the eyes below the halfway point. The most convenient way to set up the baby face is in quarter points. The nose, the corners of the mouth, and the chin come much closer to falling on these points.

As the baby head develops, the face gets longer in proportion to the cranium, which has the effect of moving the eyes and brows upward in the head. Actually, the development of the lower jaw brings that downward. and the nose and upper jaw also lengthen. As a result of these changes the eyes of an adult, and even of a teen-ager, are on the middle line of the head. It is most important to know this, because the setting of the eyes in relation to the middle line across the face is the direct way to establish the age of a child. The iris is fully developed in the baby, and will never get any larger; consequently the eyes look much smaller in the adult face. However, the opening between the eyelids does widen, so that we see more of the eyeball in an adult than we do in a baby.

Plate 52. Proportions of the baby head – second and third years

By the second and third year the eyes are about halfway up the top quarter space, which I have designated the number 1 space. The nose and mouth also appear to have moved up, and the brows now appear to be above the halfway line. Now the lips just touch the bottom of the third space. The ear has not reachcd the halfway line. However, the face has reached the proportions of three spaces: hairline to brow, brow to bottom of nose, bottom of nose to bottom of chin. Actually these three spaces are still condensed, and each will grow further. But they maintain their proportions to one another while growing. The ear is still well below the middle crossline. Note the line divided into thirds in the right half of the first drawing.

When drawing babies and children it seems easier to maintain four divisions than to use the three divisions of an adult face. While the actual head is much smaller, the spaces between the features are proportionately wider. The eyes are wider apart; the upper lip is longer; the space from eye to ear appears very wide. You have to struggle with these proportions in order to make a baby look like a baby and not like a little old bald man. The baby mouth is more pursed when relaxed. The upper lip rises sharply to its peak and usually protrudes. The chin is small and well under, with often a little fat under it. Babies’ ears vary a great deal, some being quite small and others quite large. They are usually rounder and appear thicker in comparison to the face. Babies’ brows are usually light and thin or even quite transparent. They are usually much more evident in darkhaired children. The nose is usually small and upturned, and quite rounded. The bridge of the nose is fairly round since it has not had time to develop. The cheeks are extended and full.

Plate 53. Construction of the baby head 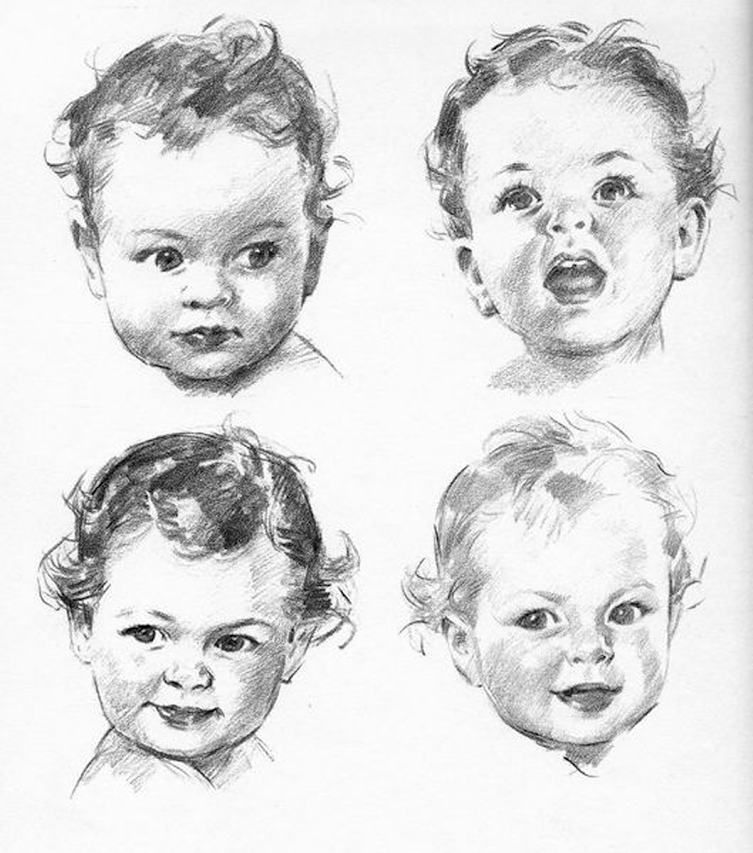 The magazines are full of baby pictures, and these are best to practice from, since no baby will hold still long enough for anyone who is not thoroughly familiar with baby proportions to draw from life. The best one can do is to make fast sketches. For this reason finished pictures of babies are usually drawn from photographs, as are the ones on this page.

As babies grow more hair, they look older, although the proportions have changed only slightly. Some babies develop long eyelashes, which, with their already large and widely spaced eyes, give a great deal of appeal. Go easy on the eyebrows; keep them delicate.

Plate 57. Some more studies of babies

Remember to keep the bridge of the nose low and concave and the two little round nostrils rather widely spaced. Let the upper lip protrude when the baby is not smiling. Set the ears fairly low, and the chin round and well under. Keep the cheeks high and full. You will usually want to add light tone with a highlight.

Plate 58. The four divisions of the face, third and fourth years